Surely we’ve all played some bass riffs on a stretched-out rubber band before, right? [Nicolas Bras] found that the ultimate musical rubber bands are bungee cords, and used seven of them to build a double-bass zither that can be plucked or struck with drumsticks. Be sure to check it out in the build/demo video after the break. 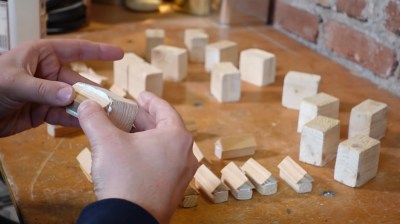 [Nicolas] is what you might call a hardware store hacker. This is not his first instrumental rodeo by far; in fact, he has spent the last 15 years building instruments from stuff like PVC and other commonly-available items.

One thing in this build that’s not so commonly available is the large sound box [Nicolas] built to strap the bungee cords across. He also made custom bridges for the bungees that are topped with triangular wood, which makes them look like little row houses.

In order to actually play the thing, [Nicolas] arranged the row houses in a 2-point bridge system for dual-note strings, which sound good between the bridges and the bungee hooks, but not so much between the bridges themselves. Overall, the zither has a great, mellow sound no matter how he plays it, and we just might have to string one of these up ourselves.

Not a strings person? Then you might be sated by [Nicolas]’ PVC pipes, which play “Popcorn” perfectly.

Thanks for the tip, [Keith]!