We’re not in the habit of recommending Kickstarter projects here at Hackaday, but when prototype hardware shows up on our desk, we just can’t help but play with it and write it up for the readers. And that is exactly where we find ourselves with the Turing Pi 2. You may be familiar with the original Turing Pi, the carrier board that runs seven Raspberry Pi Compute boards at once. That one supports the Compute versions 1 and 3, but a new design was clearly needed for the Compute Module 4. Not content with just supporting the CM4, the developers at Turing Machines have designed a 4-slot carrier board based on the NVIDIA Jetson pinout. The entire line of Jetson devices are supported, and a simple adapter makes the CM4 work. There’s even a brand new module planned around the RK3588, which should be quite impressive.

One of the design decisions of the TP2 is to use the mini-ITX form-factor and 24-pin ATX power connection, giving us the option to install the TP2 in a small computer case. There’s even a custom rack-mountable case being planned by the folks over at My Electronics. So if you want 4 or 8 Raspberry Pis in a rack mount, this one’s for you.

@jp_bennett you mean something like this except in 2U, and full mini-ITX support? Relax, only thing you need is some patience… 😉 pic.twitter.com/vQcVCwmgDc

The Appeal — And the Risks

“Wait, wait”, I hear you say, “There’s plenty of ways to rack-mount Raspberry Pis!” Certainly. The form factor options are handy, but the real magic is the rest of the board. Individually controlled power supply for all four boards from a single ATX power supply makes for a very clean solution. Need to reboot a hung Pi remotely? There’s the Baseboard Management Controller (BMC) that will do full power control over the network. That’s the real killer feature: the BMC is going to run Open Source firmware, and will power some very clever functions. Want UART to troubleshoot a boot problem? It’s available from all four nodes on the BMC. Need to push a new image to a CM4? The BMC will include image flashing functions. Built into the board is a Gigabit network switch linking the Pis, the BMC, and two external Ethernet ports, all supporting VLANs.

On the other hand, not much of the BMC wizardry is actually implemented yet on the review units. This is the project’s biggest promise and the place it could go awry. Putting together a stable firmware with all the bells and whistles in the three months before scheduled ship date may be a bit optimistic. I’m expecting a working firmware, with updates to refine the experience in the months following launch. 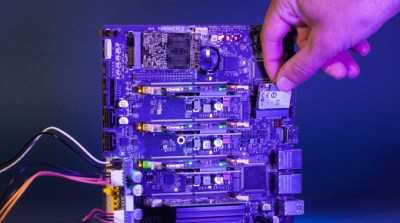 Then there’s the expanded IO. The board comes with a pair of Mini PCIe ports, 4 USB3 ports, and a pair of SATA ports. This works via the PCIe lanes exposed by the various compute modules. Nodes 1 and 2 are connected to the mini PCIe ports, node 3 to the SATA, and node 4 to the USB3 ports. On top of that, a switchable USB2 port can be dynamically assigned to any of the existing nodes. Oh, and there’s an HDMI output from node 1, so even more options, like running a Pi CM4 8GB as a desktop machine. A late option added to the Kickstarter bolts four NVMe ports to the bottom of the board, one per slot, though not every compute module has the PCIe lanes to support it.

Now keep in mind that I’m testing a pre-production unit (more on that later), and not all of the above is actually working yet. Quite a few changes are slated for the production boards vs my unit, and the BMC firmware on this board is absolutely minimal. There is also the supply-chain issues we’ve continued to cover here on Hackaday, but the TP2 has the advantage of being designed during the shortage, so should be able to avoid using hard-to-source parts.

Now let’s talk about what this *doesn’t* do. This may seem obvious, but the Turing Pi 2 doesn’t give you a single ARM machine with 16+ processing cores. There isn’t enough magic onboard to make the devices act like a unified multi-processor computer. I’m not sure there’s enough magic anywhere to really pull that off. However, what you do get is four easily-managed machines that are perfect for running light-weight services or Docker images.

Looking for a platform for learning Docker and Kubernetes? Or a place to host Gitlab, Nextcloud, and a file server? Maybe you want to play Nginx as a front-end proxy, and several devices running services behind it? The Homelab-in-a-box nature of the TP2 makes it a useful choice for all of the above. And even though you can’t reasonably do all the above on a single Raspberry Pi, a programmable cluster of 4 of them does the job quite nicely. The VLAN support means that you can add virtual NICs to your nodes, and create an internal network. With the two physical Ethernet ports, you could even use your TP2 as your primary router, on top of everything else it can do.

So what’s the actual state of the project? I have my pre-production board currently booting a Raspberry Pi CM4, a Pine64 SOQuartz module, an NVIDIA Jetson Nano, and the Jetson TX2 NX. The Jetson Xavier NX had a quirk requiring a minor board modification, but runs like a champ once that was done. There are the normal warts of a pre-production board, like extra dip switches all over the place, and a few quirks, like Ethernet only coming up at 100M for some devices. These are known issues, and a good example of why you do a test run of rev 0 boards. The final product should have all the kinks worked out.

I’ve been monitoring power draw, and the most I’ve managed to pull is a mere 30 watts of power. This suggests a real-world use case, an off-grid compute cluster. The mini-PCIe ports should allow for an LTE modem (Or you can use Starlink if you’re *way* off grid). Add a couple cameras and install the Zoneminder docker images, and you have a low-power video monitoring solution. Add a RTL-SDR dongle, and the rtl_433 software listening to a solar-powered weather station, and you can track the weather at your remote location, too. Just for fun, I ran a Janus docker image on one of the Raspberry Pi CM4s on my TP2. Janus is the WebRTC server we’ve integrated into Zoneminder, and I was able to live stream 12 security cameras at 1080p, only using around 25% of the available processor power, or a load of 1 on a four core Pi. It’s a testament to how lightweight Janus is, but also a great example of something useful you could do with a TP2.

The Kickstarter is over, with better than two million dollars raised, but don’t sweat it, because you will soon be able to purchase a Turing Pi 2. Ordering will be handled through the Turing Pi website itself, stay tuned for the details. There will be a few months til the final revision of the board is finished and shipped, hopefully with some killer firmware and everything working exactly as advertised. Then finally there’s the alluring RK1 compute board, with up to 32 GB of ram and eight cores of Arm goodness from the RK3588. That’s a little further out, and may be a second Kickstarter campaign. I asked about mainline support for the RK1, and was told that this is a primary goal, but they’re not exactly sure on the timing. There is quite a bit of excitement around this particular chip, so look forward to the community working together to get all the needed bits in place for mainline support.

There may be an unexpected consequence of the Turing Pi 2 and RK1 using the NVIDIA Jetson SO-DIMM connector. Imagine a handheld device built on the Antmicro open source Jetson Baseboard, that woks with multiple compute modules. I mentioned the Pine64 SOQuartz: That’s not an officially supported board in the TP2, but because Pine64 built it to the CM4 specifications, it clicks right into the adapter card and works like a champ. There’s an interesting possibility that one or two of these compute module interfaces will gain enough of a critical mass, that it gets widely used in devices. And if anyone wondered, using the TP2 CM4 adapter doesn’t magically allow booting a CM4 in a Jetson Nano carrier board. Yes, we checked.

So is the Turing Pi 2 for you? Maybe. If you don’t mind juggling multiple single-board computers, and the mess of cabling required, then maybe not. But if the ability to slot four SBCs in a single mini-ITX case, with a BMC that makes life way easier sounds like a breath of fresh air, then give it a look. The real test will be when the finished product ships, and what shape the support is in. I’m cautiously optimistic that it won’t be terribly late, and that it will have working OSS firmware. I’m looking forward to getting my hands on the final product. Now if you’ll excuse me, I think I need to go set up an automated system for building aarch64 docker images.