Multirotor drones are significantly more popular than conventional helicopter designs for many reasons, which do not include efficiency. Making use of the aerodynamic effects behind this, [Nicholas Rehm] was able to significantly increase the efficiency of his experimental tricopter by turning it into one large spinning propeller.

Since aerodynamic drag is proportional to velocity, a small, high-RPM propeller will require more power to produce the same thrust as a large, low-RPM propeller. With this in mind, [Nicholas] built a tricopter that can rotate all three long arms together using a single servo, giving it very aggressive yaw control. By attaching a wing to each of the arms, it becomes a large variable pitch propeller powered by tip thrusters. 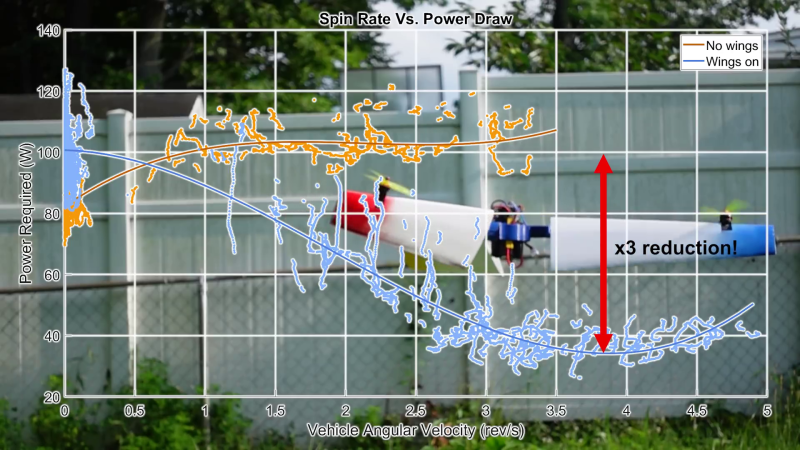 To measure the efficiency of the craft, a small lidar sensor was added to allow accurate PID altitude control. While keeping the drone at a constant altitude a few feet off the ground, [Nicholas] measured the power draw of the motors in a hover, and then let the drone spin around its yaw axis up to almost 5 rev/s.

At a spin rate of 4 rev/s, the power draw of the motors was reduced by more than 60%. Even compared to the drone without the added weight of the wings, it still used 50% less power to maintain altitude.

Since [Nicholas] hadn’t yet implemented horizontal position control while spinning, the length of each test run was limited by the wind drift. He plans to solve this, and also do some testing of the drone in horizontal flight, where the added airfoils will also increase efficiency.

We’ve featured a few of [Nicholas]’ flying machines here on Hackaday, including a foam F-35 VTOL and a cyclocopter. Most of his aircraft run his open source dRehmFlight flight stabilization, created specifically for hacking.