Have you ever experienced dizziness, vertigo, or nausea while in a virtual reality experience? That’s VR sickness, and it’s a form of motion sickness. It is not a completely solved problem, and it affects people differently, but it all comes from the same root cause, and there are better and worse ways of dealing with it.

If you’ve experienced a sudden onset of VR sickness, it was most likely triggered by flying, sliding, or some other kind of movement in VR that caused a strong and sudden feeling of vertigo or dizziness. Or perhaps it was not sudden, and was more like a vague unease that crept up, leaving you nauseated and unwell.

Just like car sickness or sea sickness, people are differently sensitive. But the reason it happens is not a mystery; it all comes down to how the human body interprets and reacts to a particular kind of sensory mismatch.

Why Does It Happen?

The human body’s vestibular system is responsible for our sense of balance. It is in turn responsible for many boring, but important, tasks such as not falling over. To fulfill this responsibility, the brain interprets a mix of sensory information and uses it to build a sense of the body, its movements, and how it fits in to the world around it.

These sensory inputs come from the inner ear, the body, and the eyes. Usually these inputs are in agreement, or they disagree so politely that the brain can confidently make a ruling and carry on without bothering anyone. But what if there is a nontrivial conflict between those inputs, and the brain cannot make sense of whether it is moving or not? For example, if the eyes say the body is moving, but the joints and muscles and inner ear disagree? The result of that kind of conflict is to feel sick.

Common symptoms are dizziness, nausea, sweating, headache, and vomiting. These messy symptoms are purposeful, for the human body’s response to this particular kind of sensory mismatch is to assume it has ingested something poisonous, and go into a failure mode of “throw up, go lie down”. This is what is happening — to a greater or lesser degree — by those experiencing VR sickness.

How Can It Be Dealt With?

For those unlucky enough to be susceptible, there are three ways of dealing with VR sickness: avoidance, moderation, and adaptation. Fortunately, unlike being stuck at sea while seasick, one is typically in complete control of their engagement in a VR experience. Not all experiences will be an issue, and people are differently sensitive. One may be able to tolerate some things, but others not at all.

Most VR experiences include some kind of comfort rating, and offer different locomotion and interface options. Seated experiences tend to be more comfortable ones. Teleportation-type movement and snap turning also tend to be more comfortable for users. Smooth locomotion and smooth turning are more challenging. These options allow one to avoid some elements, and moderate others.

It is also possible to adapt, and here a bit of education will ease the process of getting one’s “VR legs”.

Sailors eventually get their “sea legs” and adapt to an environment in which motion sensed by their bodies does not match what their eyes see. Astronauts residing on the ISS (International Space Station) have a similar experience: in microgravity, the inner ear does not provide useful information. As a result, astronauts’ brains eventually learn to rely primarily on visuals. (As it happens, after an extended period in microgravity, astronauts suffer serious sensory mismatch when returning to Earth. As Chris Hadfield described it in a talk I attended, “you’re smiling for the camera but you feel terrible.”) 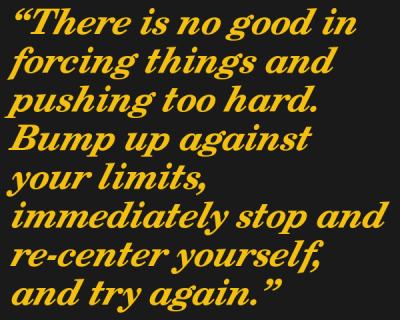 I have some added insight into the adaptation process thanks to long experience with a disease that affects my vestibular system. In physiotherapy, I learned that the brain is highly plastic and in most cases can is able to re-learn the necessary lessons. But it’s best to know a bit about how exactly this process works.

While the brain is capable of re-learning how to deal with confusing sensory input to the vestibular system, this learning happens with a high degree of specificity. That means that if one practices a certain thing, such as looking left while moving forward, the brain only re-learns how to deal with that specific thing. One cannot practice a narrow activity and expect it to “carry over” in a general sense. One will only get better at the things one practices.

My advice to those attempting to gain their VR legs is to expose yourself to a mix of different activities in VR that challenge your sense of balance, and do so gently and in moderation, for short periods at a time. There is no good in forcing things and pushing too hard. When you bump up against your limits, immediately stop and re-center yourself, and try again. Then after a short while, give yourself a rest.

Vestibular physiotherapy and rehabilitation exercises are designed with this in mind, and the same principles apply.

Will VR Develop Past This?

In a way, modern VR development has already done much to eliminate many common triggers of VR sickness at a low level. High frame rates and highly accurate motion tracking aren’t just for providing good visuals and satisfying feedback. Display lag and subtly delayed visuals can cause feelings of illness, and these have been impressively addressed in the development of modern headsets. Smaller and lighter headsets also make for more secure and stable mounting to users’ heads; loose and wobbly headsets being also a path to visual mismatch.

The experiences coming from the VR applications themselves are another story, however. Some software titles are mindful of comfort level when it comes to their design of interfaces and experiences, while others seem to ignore comfort completely in favor of exploring novel gameplay. One thing that’s clear is that it is still early in this space.

In the meantime, if you find yourself suffering from VR sickness, the best most obvious thing to do is avoid applications and experiences that cause you to feel ill. Use others in moderation, and if you’re determined to adapt, then follow the guidelines I laid out earlier. Your stomach will thank you for it.