Most modern computer games have a clearly-defined end, but many classics like Pac-man and Duck Hunt can go on indefinitely, limited only by technical constraints such as memory size. One would think that the classic electronic memory game Simon should fall into that category too, but with most humans struggling even to reach level 20 it’s hard to be sure. [Michael Schubart] was determined to find out if there was in fact an end to the latest incarnation of Simon and built a robot to help him in his quest. 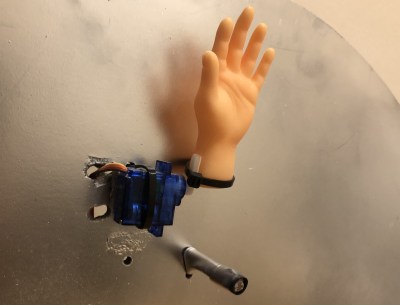 The Simon Air, as the newest version is known, uses motion sensors to detect hand movements, enabling no-touch gameplay. [Michael] therefore made a system with servo-actuated silicone hands that slap the motion sensors. The tone sequence generated by the game is detected by light-dependent resistors that sense which of the segments lights up; a Raspberry Pi keeps track of the sequence and replays it by driving the servos.

We won’t spoil the ending, but [Michael] did find an answer to his question. An earlier version of the game was already examined with the help of an Arduino, although it apparently wasn’t fast enough to drive the game to its limits. If you think Simon can be improved you can always roll your own, whether from scratch or by hacking an existing toy.