While the Internet is a great place to get access to any music or audio you can dream of, there’s still a place for broadcast radio. [mit41301] has recently been exploring implementing a simple FM tuner chip in various projects.

The chip in question is the RDA7088, which is designed to require the bare minimum in external components, and is available in a compact SOP16 package. As per the datasheet, it was intended for use in applications like portable radios, PDAs, cell phones, and MP3 players. 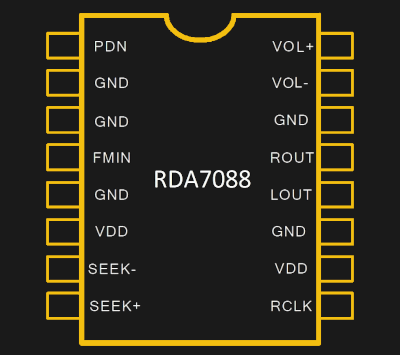 [mit41301]’s first attempt involved using the chip as a simple tuner, hooked up to a PIC10F200 for control. Investigation revealed it was capable of outputting digital audio via I2S, while being commanded via I2C. By default, it spits out audio at a low sample rate of 8 kHz, but reconfiguration will jump that up to 44.1 or 48 kHz. Piping that digital I2S stream out to a DAC then delivers analog output that can be fed to an amplifier. The build also got remote control, with the PIC handling decoding IR signals and outputting commands to the radio chip.

Following this success, [mit41301] then went further, hooking up an ESP-01 to the chip to try and get RDS going. If you’re unfamiliar with the Radio Data System, it’s a way for short textual messages to be sent out by FM broadcasters. In addition to the duties carried out by the PIC module, the ESP-01 is also charged with receiving RDS data from the RDA7088, and outputting it to a display.

While using such chips is routine in industry, it’s always great to see a DIY guide to interfacing with specific hardware. If you want to integrate FM radio into your own projects, the RDA7088 is a simple and easy way to do so. We’ve seen similar work before, adding FM radio to the Raspberry Pi.