If nothing else good came out of 2020, we can say that we at least have “Instrument of the People” — some 1967-era footage of Gibson Guitars’ “craftory”, which was discovered sometime in the fall of 2020. It appears a bit boring at first — a suit slowly approaches the camera on a dimly-lit factory floor and you half-expect an ‘oh, I didn’t see you there’ type of introduction, but no. When he reaches the foreground, he finds a candy apple-red Gibson semi-hollow body guitar waiting for him. After giving the thing a quick once over, he assesses the straightness of the neck and then begins shredding on it, fingerpicking style.

If you like this or any type of guitar music, then hang on to your headstock, because it lilts nonstop throughout this 20-minute tour as we see a parade of nameless, and often headless, players showing their stuff on various styles of Gibson both electric and acoustic. 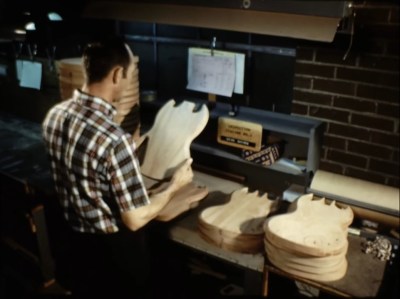 The narrator gets down to business soon enough, and we find out that the first of roughly 1500 steps in crafting a genuine Gibson guitar is selecting the finest tonewoods like spruce, maple, ebony, and rosewood. From there, we look at machines that do the rough shaping of solid-body electrics, the special measures used to carve archtop guitars, and the matchbooking of soundboards for dreadnoughts et al.

It is around this time we learn that Gibson brought the f-hole to the guitar in the 1930s. Later, we learn even more casually that a Gibson employee invented the truss rod — a steel rod running through the neck that can be tweaked to adjust the string action.

Speaking of necks, most of them are carved on a special machine, but for some models, only a hand-shaved neck will do. On top of those necks go the finely-inlaid fingerboards, which is all done handily by skilled people. No guitar type is left unplucked throughout this tour, though there is little attention paid to the classicals, mandolins and banjos the company produces.

Sixty to ninety craftory-operating days later, a Gibson guitar is considered complete and ready for sale. On each axe, the final coat of lacquer is buffed to a carefully-researched 7/1000ths of an inch, which is supposed to provide the optimal combination of tone quality, long-lasting wear, and permanent luster. Well, they certainly seem to hold their value.