If you didn’t grow up clutching Nintendo’s original DMG-01 Game Boy, it might difficult to see the appeal in 2023. It had the ergonomics of a brick, the system’s unlit LCD screen utilized a somewhat nauseating green color palette, and when compared to its contemporary competition like the Sega Game Gear or Atari Lynx, it would certainly appear to be the inferior platform. But despite its faults there was just something magical about the machine, and those who have a soft spot for the iconic handheld are always eager to relive those glory days.

Now, thanks to the incredible work of [Bucket Mouse], playing the old “brick” Game Boy doesn’t have to be nearly as austere an experience as it was in 1989. That’s because he’s developed a set of replacement PCBs for the handheld that not only implement all of the features of the later Game Boy Color, but sprinkle in some modern niceties as well. The result is a handheld that looks like the original on the outside, but plays all your favorite games even better than you remember them. 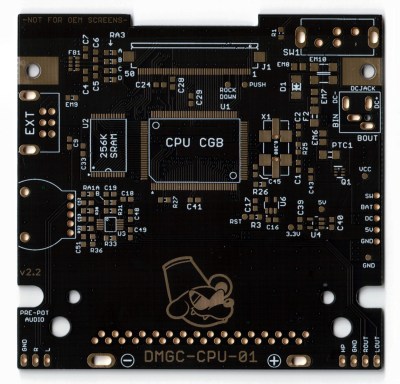 [Bucket Mouse] has put together some superb documentation for this project, and the design files are released under the Creative Commons license for anyone who wants to spin up their own copies. He’s even selling boards for those who don’t want to go through the time and trouble of getting them manufactured. But be warned — this is no weekend project.

To start with, you’ll need to salvage several key components (such as the CPU and SRAM) from a sacrificial Game Boy Color, and pull the external connectors off of your Game Boy’s original PCB. Then you’ll need to pick up a third party LCD and lens at the absolute minimum, though you might as well go all in and get a custom new-manufactured case and button set while you’re at it.

Beyond the ability to play Game Boy Color games, the new internals offer a number of improvements over the stock hardware. For example there’s an integrated navigation switch (mounted where the contrast dial used to be) that lets you page through the settings menu of the upgraded IPS LCD panel. The audio hardware has also been upgraded for better sound, and a modern switch mode power supply should get you a few more hours out of the AA batteries than before. You’ve also got the option to swap the face buttons for the more tactile versions used in the Game Boy Advance SP, and if you really want to show off that aftermarket translucent case, add some RGB LED lighting to your born-again handheld.

As you might expect, this project has been a long-term labor of love. [Bucket Mouse] has been dropping occasional updates in the Hackaday Discord server for several months now, and it’s been fascinating to see the progression. You may recall we covered an earlier version of the concept, where he literally crammed a Game Boy Color motherboard into the DMG-01 case, but this new approach allows for a much more professional and reliable installation — befitting the legendary reliability of Nintendo and Gunpei Yokoi’s portable brainchild.