Sometimes the journey itself is the destination. This one started when [Samy] was 10 and his mom bought a computer. He logged on to IRC to talk with people about the X-Files and was WinNuked. Because of that experience, modulo a life of hacking and poking and playing, the talk ends with a wearable flex-PCB Tesla coil driving essentially a neon sign made from an ampule of [Samy]’s own breath around his neck. Got that? Buckle up, it’s a rollercoaster. 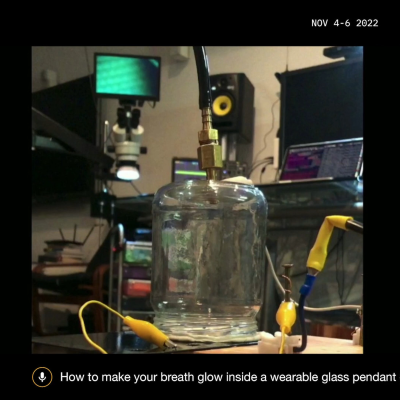 Without giving too much away, this talk is about doing projects and learning things, and how following your nose can lead you into unexpected places, new discoveries, and more crazy ideas. And while the motivating project is the glowing tube filled with mostly nitrogen, the talk covers a ton of side projects that got [Samy] there. For instance, the whole thing wouldn’t have been possible if [Samy] didn’t have a solid vacuum setup. And he wouldn’t have had a vacuum setup if he hadn’t had a crazy idea to make a cursed USB-condom device, for which he needed to learn to do thin-film sputtering to deposit indium tin oxide. This of course leads to a side quest making freeze-dried ice cream.

At the same time, [Samy] is interested in quantum mechanics, and one of the do-at-home experiments requires some custom vacuum tubes, which you’d want to make if you already had a high-vacuum setup, so [Samy] has to learn glassblowing. So he flies out to Wisconsin to learn from some scientific glassblowers, stopping along the way at the university to visit a magneto optical trap (more quantum!), and then get back to work on the centerpiece.

Or maybe it’s not the centerpiece. The glowing tube of [Samy]’s breath, harvested from a blown-up rubber balloon, is actually a study for what will eventually be the centerpiece – a wireless neon sign for [Samy]’s wall. Or maybe he’ll fill it with some other gasses, noble or otherwise. We just don’t know yet.

The things we love about [Samy]’s talks is that he explains everything along the way without talking down to the audience, and that he cites his sources. Because of that, if you’re interested in any of the myriad sub-projects that get mentioned along the way, there are great resources for you here. [Samy] is also very good at giving credit to the friends and hackers who’ve inspired him, a surprising number of whom are in the Hackaday orbit and even gave talks at Supercon!

Re-watching this talk again, I’m struck by how many of these projects were admittedly just out of [Samy]’s reach when he began them, giving him a plausible challenge to overcome in realizing them. That really is the hacker’s path, and it makes a great talk. Enjoy.