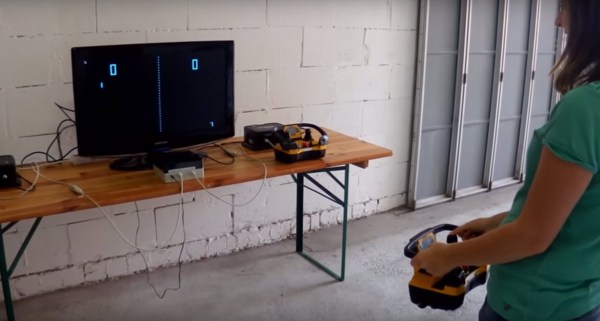 Here’s a project that will leave you scratching your head! Ever wonder what it would be like to play Pong using those big heavy duty shop crane controllers? No? We haven’t either, but that didn’t stop [hwhardsoft] from trying it anyway!

Now to be fair, they actually built it for the company that manufacturers them — guess it might be a fun game for in the lobby? The project has a Raspberry Pi 2 at the heart with a Pong game written in Python. The fun part was connecting the controllers.

Each controller is wireless with a separate control box, so they were able to modify the control box to avoid making any changes to the actual controller. But since they wanted to use the joysticks, they still had to use an additional ATMEG328 microcontroller to perform the analog to digital conversion for the Pi — it wasn’t exactly plug and play.