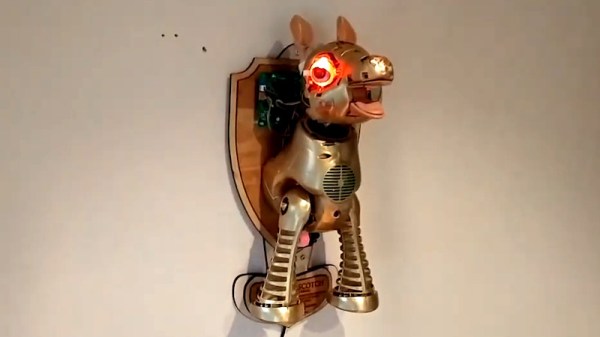 Robotic animal companions were once all the rage, though their limited personalities and annoying sound effects often relegated them to the bin fairly quickly. This makes them all the more ripe for hacking. [David Bynoe] had a Baby Butterscotch that was in need of a new home, and he decided to put the pony to work at his local hackerspace.

The Baby Butterscotch pony is a charming beast in stock form, yet highly menacing once its skin is removed. Mounted to a plaque, the pony has three PIR sensors that detect movement. These sensors are used to allow the pony to act as a door greeter, waking up when people enter the hackerspace and following them around the room. The additional hardware interfaces with the pony’s stock electronics by using floating capacitors and relays to activate the original capacitive touch sensors. The final piece is finished with a coat of gold paint and some RGB eyes to complete the look.

It’s a fun project that gives Vancouver Hack Space a little personality, and we’re sure it’s enjoyed by the members. We’ve seen other companion toy hacks before, with the Furby always being a ripe target for projects. Video after the break.