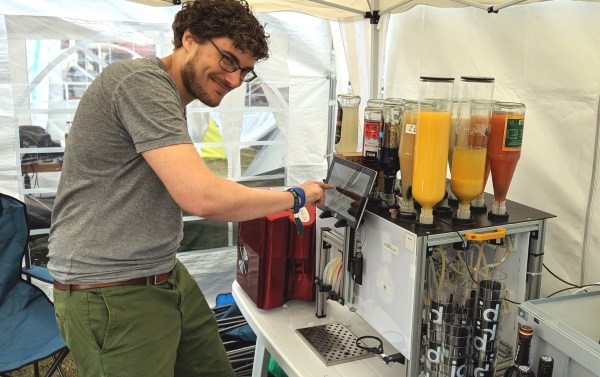 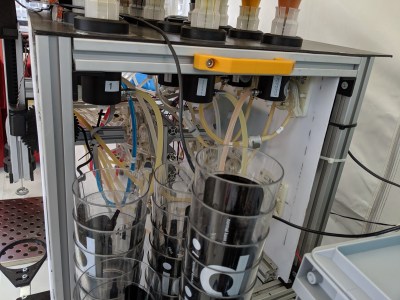 END_OF_DOCUMENT_TOKEN_TO_BE_REPLACED

It’s been a rough day at the office. You need a break. But by yourself? No, what you need is to be Synergized! This Barbot only works if all four keys are inserted and turned — kind of like a nuclear launch procedure — only then will it dispense four perfectly sized drinks to make your day better.

The Synergizer uses an Arduino to control a belt driven linear actuator which moves the spout from cup to cup. A series of reed switches along the length provide feedback to the system for positional control. The machine makes use of a peristaltic pump, called the Bartendro Dispenser, which pumps an exact volume of your liquid of choice into each cup. The cool thing with peristaltic pumps is they are self priming,and capable of pumping an exact volume of liquid every time.

[Nick Poole], the designer, also included a CPU fan and heat-sink paired up with a peltier plate in order to also chill the liquid as it is being pumped. To make it even more interesting, he added a four key override, so the Synergizer can only be used if all four unique keys are inserted.