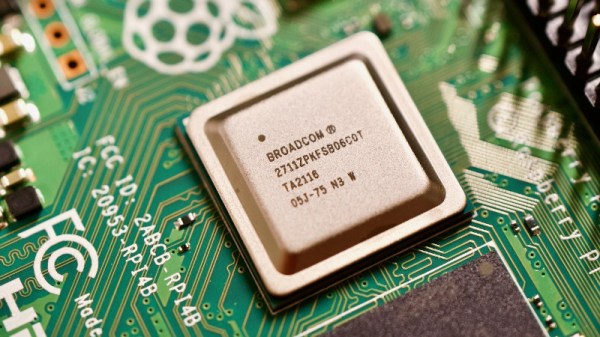 Those of us who have followed the Raspberry Pi over the years will be familiar with the various revisions of the little board, with their consequent new processors. What may be less obvious is that within the lifetime of any chip there will often be minor version changes, usually to fix bugs or to fine-tune production processes. They’re the same chip, but sometimes with a few extra capabilities. [Jeff Geerling] didn’t miss this when the Raspberry Pi 400 had a BCM2711 with a newer version number than that on the Pi 4, and now he’s notices the same chip on Pi 4 boards.

Why might they run two different revisions of the chip in parallel? It seems that the update changes the amount of memory addressable by the eMMC and the PCIe bus, the former could only see the first 1GB and the latter the first 3Gb. For the lower-spec Pi 4 boards this doesn’t present a problem, but for those with 8 gigabytes of memory it could clearly be an issue. Thus the Pi 400 and the top spec Pi 4 now have a newer BCM2711 version. This will almost certainly pass unnoticed for the average Raspberry Pi OS user, but the extra memory addressing space should be of interest for hardware experimenters wishing to expose that PCIe bus and talk to peripherals such as a GPU. That said, though he suggests the Compute Module 4  has the newer revision, his own experiments were unsuccessful.

[Editor’s Note: our own overclocking experiments show the C-version SOCs to run cooler/faster than their B counterparts, so it’s nice to have the better chips in the “normal” Pi form factor and not just the Pi 400 and compute modules.]