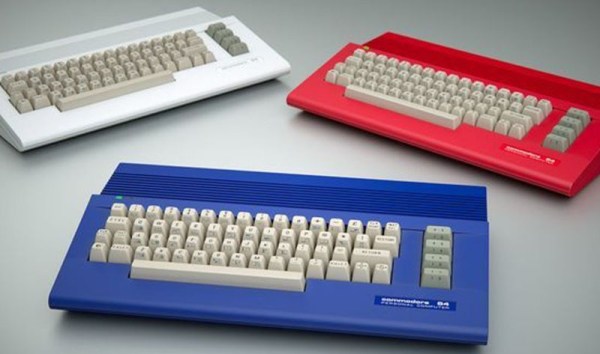 Some time in the 80s, the plastic injection molds for the Commodore 64C, the Commodore 128, and the Plus/4 were shipped from somewhere in Asia to the great Commodore Mother Brain in West Chester, Pennsylvania. These molds had already produced a million or two cases, but there were some issues with production – too much waste, or something like that. A mechanical engineer took a look at the molds, sent out some recommendations, and moved the 2500 pound molds to a corner of the building.

For some time after a gray day in April, 1994 these molds sat in a West Chester, Pennsylvania warehouse until they were sold off. They made their way to a plastics manufacturer around Dallas, Texas where they sat for twenty years. All things must pass, sometimes several times, and this plastics manufacturer closed down, contacted an auctioneer, and began to sell off some of their equipment.

The hero of our story, [Dallas Moore], owns a small business, buying and selling everything from Barbie dolls to antiques. He found an ad for an auction at a plastics manufacturing plant in the newspaper, and figuring he could find something interesting, headed out to the auction preview.

The auctioneer at this liquidation sale asked [Dallas] what he did, and mentioned there was something pretty cool tucked away in a warehouse full of hardened steel molds. Something about molds for old computers. These were the molds for the Commodore 64C, Commodore 128, and the Commodore Plus/4. A literal crucible of computing history, stacked on a pallet and up for sale.

The auctioneer said one of his friends was interested in the molds, and thought they would make a neat coffee table. Something about this struck [Dallas] the wrong way and for the entire drive home he thought about someone taking history and turning it in to a piece of furniture. He decided to buy these molds and lugged the three 2500 pound pieces of hardened steel to his shop. Not wanting to let a good piece of history go to waste, he contacted another plastics manufacturer, planned a run of a thousand or so Commodore 64C cases in red, white, and blue. [Dallas] is funding the whole production run through Kickstarter.

To me, this is one of the greatest retrocomputing successes in recent memory. There will always be someone putting SD cards in old computers, getting them on the Internet (and especially pointed towards our retro edition), and cloning complete systems in FPGAs. This, though, is a clear example of someone recognizing the historical importance of several thousand pounds of steel, realizing there’s a market out there, and doing the leg work to remanufacture these pieces of history.

I put in my $45 for a red one, and I tipped off [Bil Herd], designer of the C128 and Plus/4, to this Kickstarter. He’s been talking with [Dallas], there I’m sure he’ll chime in on the comments with some retellings of Commodore battle stories.

If it arrives in time, I’ll be bringing my limited-edition red 64C case to the Vintage Computer Festival in Wall, NJ April 17-19. That’s a plug for the event. If you’re in the area, you should come.

EDIT: [Dallas] has a different story of where the molds came from.