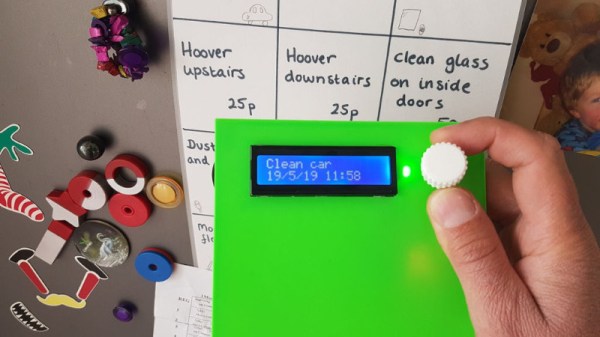 It’s rare to find anyone that gets excited about doing chores. This can lead to members of a household abrogating their duties. In these cases, enforcement is a common tactic. Tired of laminated chore grids and inconsistent results, [alastair-a] decided to tech up with an electronic chore tracking system.

[alastair-a]’s Task Manager is based around an Arduino Nano, fitted with the ever-popular HD44780-compatible LCD screen. Interfacing with the unit is via rotary encoder and RFID tag, while a real-time clock module keeps track of the time.

A custom data structure is used to manage tasks. This allows varying frequencies to be set for different tasks, as well as keeping track of the time of completion by different users. Each user has their own personal RFID tag, which can be swiped across the reader to indicate when a chore has been done.