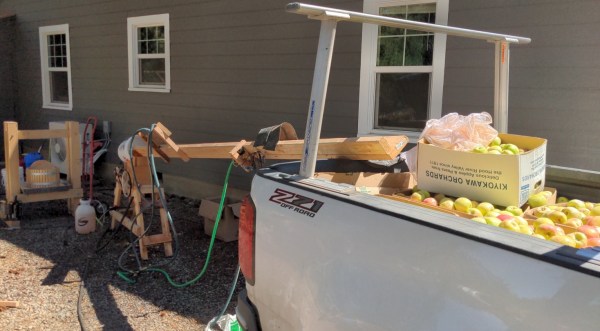 A fresh-squeezed glass of orange juice with breakfast seems like a trope that’s straight from a late 1980s sitcom. Making orange juice is easy; press until the liquid comes out. Apple juice (and, by extension, apple cider) is the same principle but requires much more force to squeeze out the juice. So what if you, like [Peter], have 900 lbs (408.2 kg for those metrically minded) of apples that you want to make cider out of? The obvious solution is to create a somewhat automated homemade cider press with lasers.

An earlier effort to make 25 gallons of cider took several full days of struggle for four people, so [Peter] knew he had to plan better next year. [Peter’s wife] milled and glued red oak into a large, sturdy frame that could press down with proper force and not break. [Peter] reached out to the local metal shop to fabricate a stainless steel tray with a custom drain. The cider basket itself and the pressboard were maple with waterproofing oil.

However, just because you can press apples, doesn’t mean you’re ready to make cider. They still need to be washed, cut, and ground into a pulp. A ramp was fashioned that it could be set in a truck bed with sprayers to wash the apples as they rolled by. A laser circuit with an LM393 opamp and a photoresistor allowed the sprayers to only activate when there was actually an apple to spray. Apple grinders are tricky as they need to survive the drop of several one-pound balls while staying at a reasonable speed. The grinder dispenses the pulp into a mesh nylon bag in a 5-gallon bucket, ready to be pressed. For the curious reader, 900lbs of apples yielded 60 gallons of delicious cider.

If you’re looking for a smaller scale press, here’s a cider press that’s a little simpler to make.