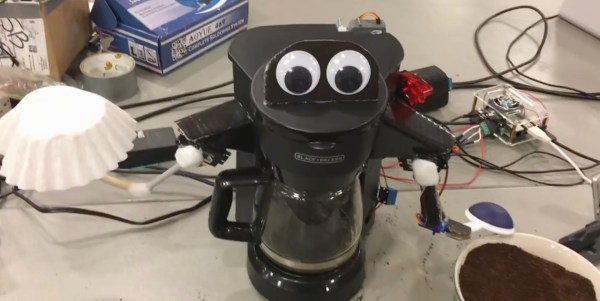 To keep hackers fueled and hacking, why not hack a coffee maker into a coffee brewing robot? [Carter Hurd] and [David Frank] did just that at The Ohio State’s Hack OHI/O 24 hour Hackathon. They even won the “Best Hardware Hack”. The video below shows it in action but the guys sent us some extra details on how it’s made.

To give it a voice they put Alexa on a Raspberry Pi. Using an audio splitter they have the voice go both to a speaker and to an Arduino. The Arduino then uses the amplitude of the audio signal’s positive values to determine how much to open the “mouth”, the coffee maker’s hinged cover. As is usually the case, there’s some lag, but the result is still quite good.

The brewing is also controlled by the Arduino. They plan to add voice control so that they can simply ask, “Alexa, make me coffee”, but for now they added a switch on the side to start the brewing. That switch tells the Arduino to work one servo to open the cover, another to insert a coffee filter, and two more to scoop up some coffee from a container and dump it into the filter.

They replaced the coffee maker’s on/off switch with a relay so that after the Arduino closes the cover again, it uses the relay to start the brewing. The result is surprisingly human-like. We especially like the graceful movement achieved by the two servos for scooping up and dumping the coffee. Full disclosure: they did admit that it would often either not scoop enough coffee or scoop enough but spill a bunch on the group.

END_OF_DOCUMENT_TOKEN_TO_BE_REPLACED 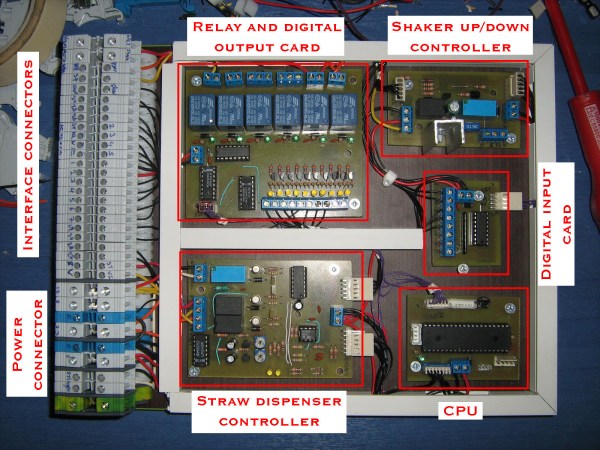 Although [Giorgos Lazaridis] has graced Hackaday several times, we’ve never covered the build of his frappé machine which reader [Jim] encountered after searching for information about the PIC16F1937. His site shows the build as in-progress, but he definitely has a working prototype here, and it’s definitely awesome.

Frappé coffee is made by mixing spray-dried instant coffee, a small amount of cold water, and sugar to taste in a manual shaker or a milkshake machine that uses a single beater. More water and/or milk is added as desired to top off the glass. The method was invented by accident in Thessaloniki, Greece, and has become quite popular.

In addition to sixteen pages of detailed build logs, [Giorgos] shot videos that demonstrate each of the modules that make up the machine. The operator puts a glass in a holder attached to a turntable. It moves first to the coffee and sugar dispenser, which fall through the same easily removable funnel. The next stop combines the add-water-and-beat steps beautifully. A length of hose strapped to the beater’s housing dispenses the initial cold water base. Then, the beater lowers automatically to beat the mixture. After mixing, the beater is drawn back up an inch or so, and more water is dispensed to rinse it off. Then the beater is fully withdrawn and the glass is filled the rest of the way. The final stop for the frappé is essential to the process: a bendy straw must be added. This is vitally important, and [Giorgos] handles it admirably with a stinger that shoots a straw into the glass.

[Giorgos]’s coffee robot is built around a PIC16F1937. He rolled his own PCB for the motherboard and each of the machine’s modules. There is a lot of logistical ingenuity going on in this project, and [Giorgos]’ build logs convey it all very well. Be sure to check out [Giorgos]’ machine in action after the break. The full set of eight videos that shows each module and culminates in the one below is well worth your time.