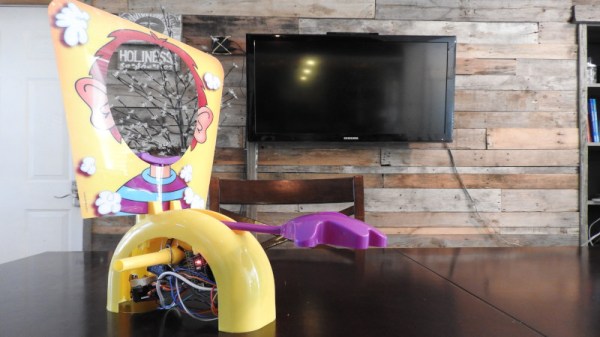 Pie Face is a game that does pretty much what you’d expect from the title. Players sit in front of a spring loaded arm, taking turns to twist a crank. Eventually, one unlucky player will release the arm and be splattered with whipped cream to the enjoyment of the group. [Harrison] wasn’t one to leave things to chance, however, so decided to rig the game.

Instead of allowing the spring-loaded arm to be released by the internal rotating drum, [Harrison] had a better idea. The drum was sanded smooth, to remove the teeth used by the release mechanism. Then, the release mechanism was replaced with a servo, controlled by an Arduino Nano fitted with a Bluetooth module. With just a tap on his smart phone, [Harrison] can trigger the game, guaranteeing his friends get the cream every time.

It’s a tidy build, and one that takes care to avoid detection with subtle design. Had he not released a Youtube video on the build, [Harrison]’s friends would likely be none the wiser. If your thirst for cheating is still unsated, consider loading your dice for a round of Settlers of Catan. Video after the break.