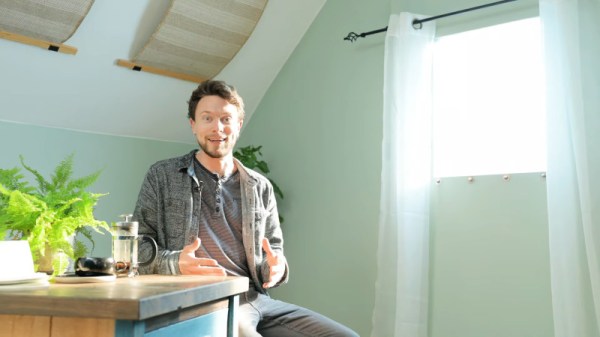 Real sunlight is a beautiful thing, but due to the vagaries of Earth’s orbit and local weather systems, it’s not available all the time. [Matt] decided this wasn’t good enough, and set about building a rig to replicate the sun’s rays as closely as possible.

The great distance between the Sun and the Earth means that the sun’s rays are essentially parallel from our local vantage point. Replicating this, and the soothing nature of a blue sky, were [Matt]’s primary goals with the project. To achieve this, an old satellite dish was pressed into service as a parabolic reflector, coated with mirror-finish vinyl strips. A 500W white LED with a good color rendering index was fitted at the focal point, outfitted with a water cooling system to shed heat. With a point source at its focal point, the parabolic reflector bounces the light such that it the rays are parallel, giving the sense that the light source is coming from an effectivelyl infinite distance away. To then achieve the blue sky effect, the light was then passed through a glass chamber filled with soapy water, which scatters the light using the Tyndall effect. This mimics the Rayleigh scattering in Earth’s atmosphere.

The final result is amazing, with [Matt] shooting footage that appears to be filmed in genuine daylight – despite being shot at night or on rainy days. He also features a cutdown build that can be achieved in a far cheaper and compact form, using Fresnel lenses and blue film. We’ve featured [Matt]’s daylight experiments before, though we’re amazed at the new level reached. Video after the break.

END_OF_DOCUMENT_TOKEN_TO_BE_REPLACED 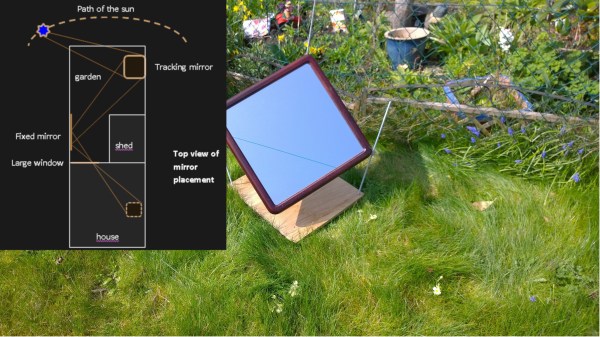 Despite a glut of introvert memes, humans need sunlight. If vitamin D isn’t your concern, the sun is a powerful heater, and it helps plants grow. Sadly for [mime], their house is not positioned well to capture all those yummy sunbeams. Luckily for us, their entry into the 2020 Hackaday Prize is their sun-tracking apparatus that redirects those powerful rays throughout the house. It uses a couple of mirrors to redirect the light around their shed and into the house. For those who work in a dim office, no amount of work is too great for a peek of natural sunlight.

Movie spoiler alert: We saw this trick in the 1985 movie Legend and it was enough to vanquish the Lord of Darkness.

This project started in 2014 and sat on hiatus for more than five years, but it is back and prime for improvements fueled by half-a-decade of experience. The parts that aren’t likely to change are the threaded struts that adjust the positioning mirror’s angle, the driving motors, and power circuitry. Their first plan was to build a solar-powered controller with an Arduino, DC motors, and sun telemetry data, but now they’re leaning toward stepper motors and a computer in the house with a long cable. They are a finalist this year, so we will keep our eyes peeled for further development.