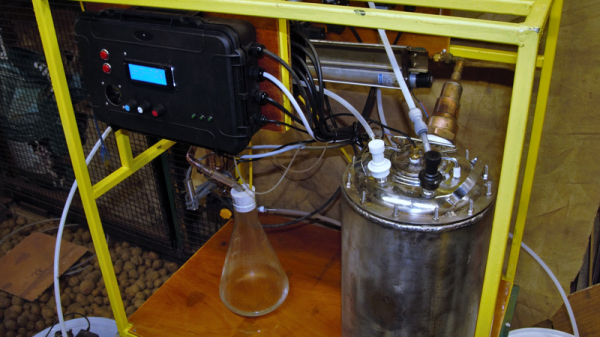 Booze, they say, is one of the major factors that shaped human history. And creating new and faster ways of making booze has always been a big engineering problem, so this project by [Goat Industries] is rather interesting. It’s a completely automated micro-distillery called the NanoStillery.

The whole thing can run unattended, but uploads data on the brewing process for remote monitoring and notification. Given that distilling involves explosive things like alcohol vapor, that’s a big plus. It is all home-made, including the boiler assembled from steel plate and an air-cooled condenser. It’s controlled by an Arduino Mega twinned with a couple of Adafruit boards that interface with the various sensors and pumps that control the flow of booze around the system. There is also an Adafruit FONA board that includes a cellular modem that uploads data to a database to monitor the progress and let you know when it is done.

The Instructable even includes the Arduino code that runs the process. It’s an impressive build from an engineering point of view, and the final touch has to be the creepy Cylon voice that the controller uses to narrate the process. There’s a video tour after the break.