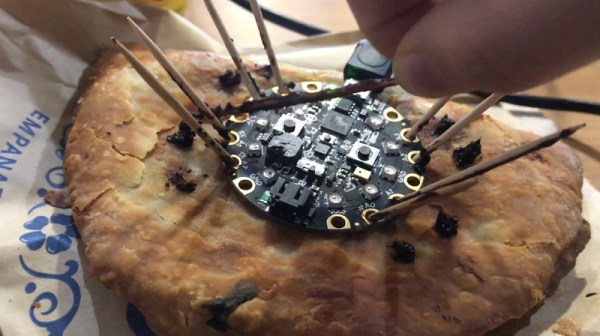 Vegemite is an Australian staple – a rich, protein-filled sandwich spread with a strong salty flavor. It serves as a great way to add a little umami to any dish, which is the hottest open secret in Australian cuisine this decade. It also works as a servicable conductive paint, which [Alex] used to make this baked good into a musical device.

The basis of the device is a basic audio example sketch running on an Adafruit Circuit Playground Express. The code was tweaked to play a 7-note C major scale. The PCB was then attached to the empanada with toothpicks through each pad, with the baked good itself seemingly connected to the ground plane. The toothpicks through the pads were then coated with Vegemite, and another toothpick treated the same way and used as a stylus. By touching the toothpick to the empanada and one of the pads, the circuit is made, and a note is played.

It’s an impractical way to go about musical performance, sure. But it is an effective demonstration of foodstuffs used in electronics. Calvin Harris did much the same back in 2009, albeit with humans substituting for the delicious pastry. Video after the break.