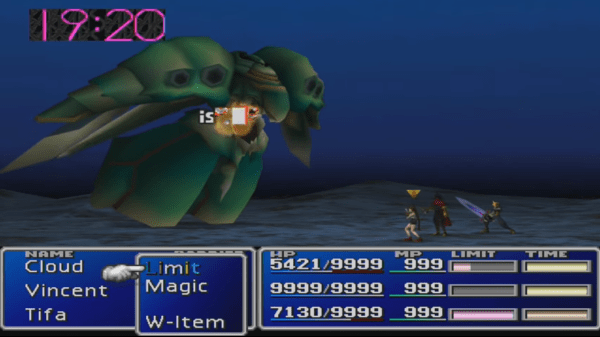 One of the fun things about old video games, besides their obvious nostalgia, is that some of the more popular games have been pried apart and tinkered with for years, leading to a lot of new “development” within the games. This often uncovers some hidden gems that gamers might not have had any knowledge of during the game’s heyday, like this coding oddity found in Final Fantasy 7 that illustrates a lot about how 32-bit processors do math.

The original PlayStation used a 32-bit RISC processor, but the most significant bit could be used for integer signing. This means that if you have an integer that has a value of 2,147,483,647 (01111111111111111111111111111111 in binary) and you add one, the value is suddenly negative 2147483648 because the most significant digit is also an indicator of the integer’s sign. In this situation, the integer is said to “overflow”. In Final Fantasy 7, if you can somehow get a character to deal 262,144 damage in one hit (much less than two billion, due to the way the game does damage calculations), the game has a little bit of a meltdown.

[4-8Productions] had to do a lot of work to show how this glitch can be exploited in the game as well. Usually damage in this game is limited to 9,999 but under certain configurations (admittedly obtained by using other exploits and tools available for FF7 like a savegame editor) two of the characters can deal more damage than this critical value, exposing the 32-bit processor’s weak spot.

Even though integer signing is a pretty basic concept for most of us, the video is definitely worth a watch especially if you’re fans of the classic game. Of course, Final Fantasy 7 isn’t the only classic that has been exploited and reverse-engineered to the extreme. You can use a Super Mario World level to implement a calculator now, too.