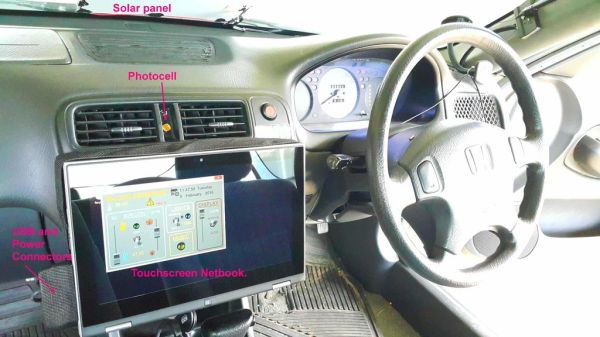 It’s a wonder that drivers are given so little insight into what’s going on under the hood. We mostly have the illusion of insight in the form of gauge, idiot lights, and when things get real, our eyesight and sense of smell. The older a car gets, the more important it is to be aware of the condition of its systems.

[Mjtrinihobby] drives a beat-up 1999 Honda Civic. He likes creating automation systems as a hobby and figured that his car would make an excellent test subject. [Mjtrinihobby] began this project with several features in mind. He wanted more control over several of the car’s systems—the A/C, lights, the fuel level, and the blower motor in the cabin to name a few—and a compact, user-friendly way to interface with them that could handle road shock and the heat of the climate he calls home.

He chose a Windows 8.1 netbook with a touchscreen display for the user interface. The netbook is running FlowStone, which is a robust graphical programming language with a long list of applications. A LabJack data acquisition board (DAQ) handles the communication between the car’s systems and the netbook.

This is much more than just a cool way to control the climate and make the headlights come on when darkness falls. For instance, [Mjtrinihobby]’s system continuously monitors the alternator’s voltage. If it measures between 7 and 12V, a friendly voice warns about possible alternator failure and disables high-draw accessories so the car has a fighting chance of making it to the mechanic.

Be sure to check out the demonstration video after the break. If OBD-II car hacks are more your speed, try building an RGB tachometer.

END_OF_DOCUMENT_TOKEN_TO_BE_REPLACED 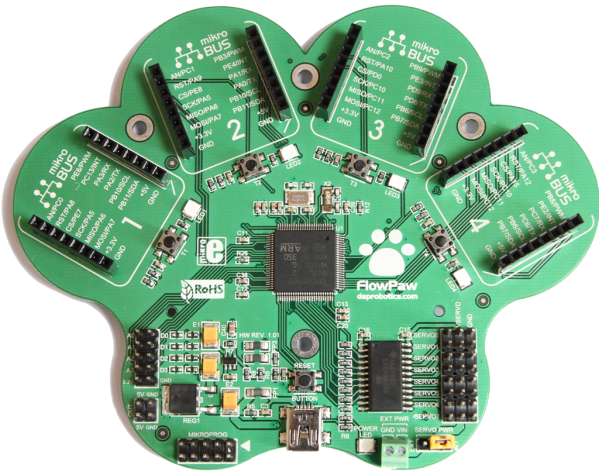 If the astonishing success of littleBits is any indication, there’s a huge market for ‘intro to electronics’ products that are much more capable than the classic Radio Shack ‘springs and components stuck to cardboard’ kits or even the very successful littleBits. FlowPaw is the latest entry in this space, combining the sensor module paradigm of littleBits with a largish microcontroller, digital and analog pins, and a great programming interface.

The big innovation in the FlowPaw is the FlowStone programming language. It’s a graphical programming language that allows young creators to connect blocks, modules, and functions together with virtual wires, but also allows the editing of different modules with Ruby. Best of both worlds, there.

The FlowPaw kickstarter includes rewards for just the FlowStone software, or the FlowPaw electronics board with a bunch of modules. Already, the team has LED, relay, accelerometer, buzzer, and capacitive touch sensors, along with a Bluetooth and speech recognition module. They’re working on a few more advanced modules for GPS, pressure, DC motor control, and RFID as well.