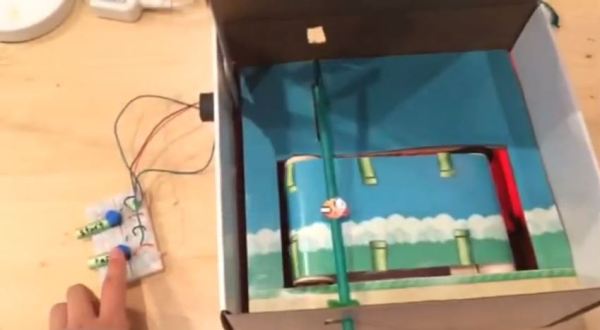 Flappy bird this, flappy bird that, we’re really not too sure how a clone of the original helicopter game became so darn popular. Anyway, [Fawn Qiu] — founder of MakeAnything — decided to hop on the bandwagon and made this awesome physical version of Flappy Bird!

She threw it together at the Tribeca Hacks Hackathon, and it uses an Arduino, two servo motors, a reed switch and some magnets. She was inspired by the original Mario in a Box game and this is a great example of her project MakeAnything, which is a technology project community which helps foster the new culture of STEM (Science Technology Engineering Mathematics) for kids and adults alike, in the United States. They believe that “with the right tool and instructions, we can all make anything and everything!”.

Stick around for the following video where [Fawn] takes it to the streets to let random strangers try their hand at the now iconic game!