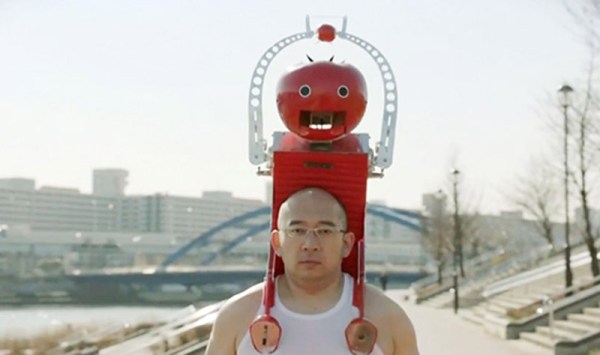 Who eats tomatoes while they run in the first place? No one… and Japanese ketchup company, Kagome would like to change that.

Dole has been sponsoring the Japan Marathon for years, supplying runners with ready to eat bananas to gnosh on-the-go for a quick boost of nutrients. Part of their advertising campaign this year is a Wearable-edible Banana that runners can eat hands free. Out of good humor and a desire to one-up the absurdity level, Kagome worked with known Japanese group, Maywa Denki to create the Tomatan, a smiling contraption that mounts on a runner’s shoulders and delivers tomatoes from a hopper directly into their face… as a reminder that though Japan could be eating wearable bananas, they could just as easily eat mechanically dispensed tomatoes instead.

Why is this awesome? When we’re talking about silliness and commercialism in Japan, the aforementioned Maywa Denki seems to always surface like a nonsense wielding genie. If you haven’t heard the name, this company is actually the identity of an artist group. They have a reputation for inventing mechanical gizmos that are humorously ridiculous, and then marketing them as serious products part of the Maywa Denki brand. The sixteen-pound piggy-back tomato feeder meant to help improve a runner’s stamina is just one example of their many “nonsense machines”.

When we bring the things we create to market, they are usually presented to the world as products of some sort. Maywa Denki bends this common concept of the product to create an identity around their works of art. Because why not solve an imaginary problem that doesn’t really need a solution?

Makes you wonder what kind of obnoxious contraption you’d build to wear in a crowd, huh?: