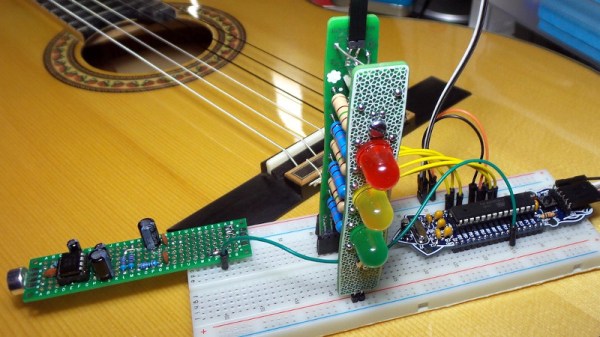 As regular readers will know, here at Hackaday we are great enthusiasts for the PCB as an art form. On a special level of their own in that arena are the Boldport kits from [Saar Drimer], superlative objets d’art that are beautifully presented and a joy to build.

The trouble some people find with some of their Boldport kits though is that they are just too good. What can you do with them, when getting too busy with hacking them would despoil their beauty? [Paul Gallagher] has the answer in one case, he’s used not one kit but two of them as for a guitar tuner project.

At its heart is a Boldport Cuttlefish ATmega328 development board, and for its display it uses a Cordwood Puzzle as an LED array. All the details are available on a GitHub page, and it’s a modified version of an Arduino guitar tuner he found on Instructables. In particular he’s using a different pre-amp for an electret microphone, and a low-pass filter with a 723Hz cut-off to reduce harmonic content that was confusing the Arduino’s algorithm.

The result is a simple-to-use device with an LED for each string of his guitar, which you can see in the very short YouTube clip below. It joins many other tuners we’ve featured over the years, of which just one is this ATmega168-powered project with MIDI-out.

END_OF_DOCUMENT_TOKEN_TO_BE_REPLACED

Just for a second, let’s perform a little engineering-based thought experiment. Let’s design a guitar tuner. First up, you’ll need a 1/4″ input, and some op-amps to get that signal into a microcontroller. In the microcontroller, you’re going to be doing some FFT. If you’re really fancy, you’ll have some lookup tables and an interface to switch between A440, maybe A430, and if you’re a huge nerd, C256. The interface is simple enough — just use a seven-segment display and a few LEDs to tell the user what note they’re on and how on-pitch they are. All in all, the design isn’t that hard.

Now let’s design a tuner for blind musicians. This makes things a bit more interesting. That LED interface isn’t going to work, and you’ve got to figure out a better way of telling the musician they’re on-pitch. This is the idea of [Pepijn]’s Accessible Guitar Tuner. It’s a finalist in The Hackaday Prize Assistive Technology round, and a really interesting problem to solve.

Most of [Pepijn]’s tuner is what you would expect — microcontrollers and FFT. The microcontroller is an ATMega, which is sufficient enough for a simple guitar tuner. The real trick here is the interface. [Pepijn] modulating the input from the guitar against a reference frequency. The difference between the guitar and this reference frequency is then turned into clicks and played through headphones. Fewer clicks mean the guitar is closer to being in tune.

This is one of those projects that’s a perfect fit for the Hackaday Prize Assistive Technology round. It’s an extremely simple problem to define, somewhat easy to build, and very useful. That doesn’t mean [Pepijn] isn’t having problems — he’s having a lot of trouble with the signal levels from a guitar. He’s looking for some help, so if you have some insights in reading signals that range from tiny piezos to active humbuckers, give him a few words of advice.

A few years ago, [Frédéric]’s brother in law wanted a guitar tuner for Christmas. Instead of going out and buying one, [Frédéric] broke out the soldering iron and built one from scratch.

[Frédéric]’s tuner is built around an ATMega168 uC on a Real Bare-Bones Board with an LM386 amplifier. The display is a standard 20×2 LCD character display, and the interface is torn from the pages of stomp box schematics with a very hefty foot switch.

Detecting the frequency of a note played into [Frédéric]’s tuner involves a fair bit of math. To measure the frequency, the Arduino samples the waveform coming from the input jack. This signal is delayed for a fraction of a second and the area underneath the real and delayed waveforms is measured. This delay slides across the original waveform until the area between the real and delayed samples are minimized. At that point, delayed wave form will be exactly one cycle behind the real signal, and the cycles per second can be calculated. It’s called the YIN algorithm, and you can read more about it here.

Since [Frédéric] already knew the exact frequency being played into the tuner, he figured it would be trivial to add a small analog audio to MIDI converter. This feature (as shown in the video after the break) turns the sounds from a guitar into MIDI notes. It’s monophonic and probably a little superfluous, but still very cool.