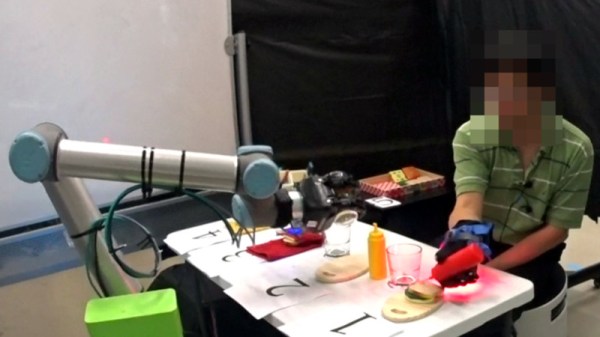 Most often, humans and robots do not have to work directly together, instead working on different parts in a production pipeline or with the robot performing tasks instead of a human. In such cases any human-robot interaction (HRI) will be superficial. Yet what if humans and robots have to work alongside each other? This is a question which a group of students at MIT’s Computer Science and Artificial Intelligence Lab (CSAIL) have recently studied some answers to.

In their paper on human-robot collaborative tasks (PDF), they cover the three possible models one can use for this kind of interaction: there can be no communication (‘silent’), the communication can be pre-programmed (state machine), or in this case a Markov model-based system. This framework which they demonstrate is called CommPlan and it uses observation data from human subjects to construct a Markov model that can integrate sensor data in order to decide on its next action.

In the experiment they performed (the preparation of a meal; see the embedded video after the break), human subjects had to work alongside a robot. Between the three different approaches, the CommPlan one was the fastest, using voice interaction only when it deemed it to be necessary. The experiment’s subjects expressed hereby a preference for bidirectional communication, much as would occur between human workers.