[AvE] noticed someone was having trouble with their Nepeploid Shilden Inversker, and after a sinusoidal lambda deplanarization test, noticed the dinglebop wouldn’t pass through the grumbo. [AvE] is probably just some guy who wears overalls to bed, but he does know a polyfractal magnetorestrictor when he sees one. To wit, he has a novel application of Eularian magnetronics resulting in a friction factor over unity. Game changing stuff here, from the guy who brought you the beer stein made out of an oil filter.

It was soft launched at the Midwest RepRap Festival this year, and now Lulzbot’s TAZ 6 is finally out. The biggest new feature? The electronics ‘brain box’ holds everything, including the power supply. This tower of brain box makes the Taz 6 harder to build from source, but there are unconfirmed reports that Lulzbot may sell this brainbox separately.

Boldport, and founder [Saar Drimer] are the cream of the crop when it comes to artistic PCBs. Boldport’s catalog and [Saar]’s portfolio include a tribute to [Bob Pease], a beautiful board with multicolor solder masks, and an emergency business card. Now Boldport is doing a beautiful PCB of the month club. It’s called Boldport Club, and each three-month membership gets you three months of pretty PCBs. The shop will also stop taking orders for the Boldport club 25 hours after this post goes live. If you missed the boat on the club, you can still get in on the pretty PCB action – we have the Boldport cordwood puzzle available in the Hackaday store.

The Apple IIgs was the last gasp of the Apple II before that platform was phased out for the Macintosh. Despite being mostly forgotten, except for thousands of units in middle school computer labs until the 2000s, it was a very interesting machine, with a wavetable synth, real multitasking, a GUI, and very high resolution graphics. After 30-odd years the IIgs now has quadraphonic sound. The 4soniq card was introduced at the WOzFest III conference last month, and it will give an Apple IIgs with four channels of audio output.

There’s a lot of stuff happening next weekend, and Hackaday is going to be there. If you’re at the Maker Faire Bay Area, Hackaday is taking over a pub. It’s on Saturday night, so it doesn’t conflict with the bring-a-hack at an undisclosed location on Sunday night. Me? I’m going to hamvention, mostly for the purposes of documenting the two parking lots full of swap meet. Find me and I’ll get you some Hackaday swag.

The Apple IIGS is the 16 bit upgrade to the popular 8 bit Apple II computer line, and with its massive boost in graphics, an Ensoniq sound system, and backwards compatibility with the 8 bit machines makes this box desirable to many retro enthusiast. The last OS update, 6.0.1, was released over 22 years ago. While it worked well for the early 90s, it was by no means perfect.

Last Sunday, a post popped up on callapple.org, announcing Apple IIgs System 6.0.2. Updates include a driver for the unreleased Apple II Ethernet card,  fixes various bugs in the file system translation system, various bugfixes to existing system programs,  fast drawing and animation tools, and of course an update to the finder to show the new revision number.

With a hope for even more bug fixes in a possible 6.0.3 revision its good to see people still giving the old Apple II line some love, as the old Apples don’t have as large of a following as their Atari and Commodore brethren. 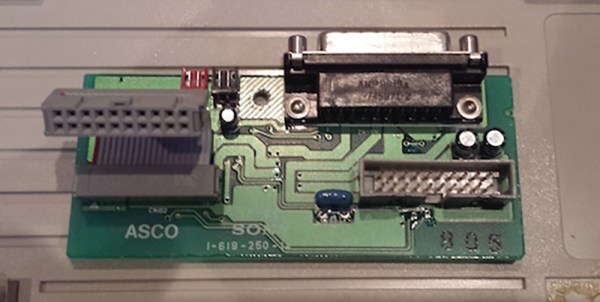 A while ago, [Steve] over at Big Mess ‘O Wires created a device that would emulate old Macintosh disk drives, storing all the data on an SD card. No, it’s not SCSI; the early Apples had a DB-19 connector for connecting 400 and 800kB disk drives. It’s a great piece of hardware for bootstrapping that old Mac you might have sitting around. Apple ][s, IIs, and //s use an extremely similar connector for their disk drives. A few rumors on some forums led [Steve] to experiment with some ancient bromide-stained boxes, and the results are interesting to say the least.

After pulling out an old //e and IIgs from storage, [Steve] found his Macintosh Floppy Emulator didn’t work with the Apples. This was due to the way Apples could daisy chain their disk drives. There’s an extra enable signal on the connector that either brings Drive 1 or Drive 2 into the circuit. Macs don’t care about this signal, but Apples do. Luckily the 800kB drives for the IIgs have an extra board that handles this daisy chain and drive eject circuitry.

After removing this extra board from a IIgs drive and connecting it to the Floppy Emu, everything worked beautifully. With schematics and a working circuit in hand, it’s now a piece of cake to build an adapter board for using the Macintosh Floppy Emu with Apples, or to build that circuit into a future revision of the Floppy Emulator.

Considering how much trouble [Steve] had bootstrapping these Apples without an SD card to Floppy drive emulator, we’re thinking this is great. The current way of making an Apple II useful is ADTPro, a program that uses audio to communicate with Apples over the cassette port. In case you haven’t noticed, microphone and headphone ports on laptops are inexplicably disappearing, making a hardware device like a SD card floppy emulator the best way to bring disk images to 30-year-old hardware.