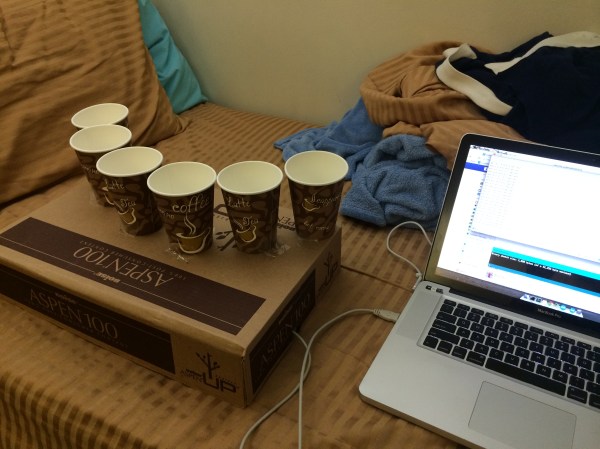 Move aside Theremin,  we have another crazy instrument that relies on its musicians to frantically wave their arms around to produce a beat. This is the Illumaphone.

[Bonnie Eisenman] recently took a course on Electronic Music, and for her final project she was allowed to basically do whatever she wanted — so she chose to create a custom musical instrument. It’s fairly simple on the hardware side, making use of coffee cups, an Arduino Uno, six photo-resistors, some alligator clips and a whole bunch of cardboard — but don’t let the lackluster parts list fool you, it actually works quite well for what it is!

Each coffee cup is a different note, and the amount of light that gets into the cup determines its volume and vibrato. It even auto-calibrates to the ambient light levels when it is first setup! The light level data is interpreted by the Arduino which then sends it to a laptop standing by, which uses a software called ChucK to synthesize the notes for output.