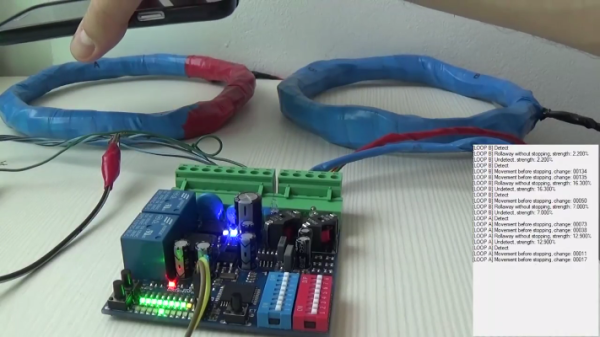 Much like George Lucas and the original Star Wars films, many of us may find that our passion projects are never quite finished, especially when new technology comes around or we just want to make some improvements for their own sake. [Muris] was featured a while back for a vehicle detecting circuit, but is back with some important upgrades to his project. (Which, luckily, do not include any horrible CGI aliens.)

For starters, the entire project has been reworked from the ground up. For anyone unfamiliar with the original project, the circuit detected a vehicle via an inductive loop and was able to perform a task like opening a gate. It now has two independent channels which are polled separately, yet has a reduced parts count which should make construction simpler. The firmware has also been reprogrammed, and in addition to sensing a vehicle’s presence can now also measure the speed of any vehicles passing by.

The complete list of improvements can be found on the project page, and an extensive amount of documentation is available on this if you want to try to roll out your own inductive loop vehicle detector. Of course, this isn’t the only way to detect a vehicle’s presence if inductive loops aren’t really your style.