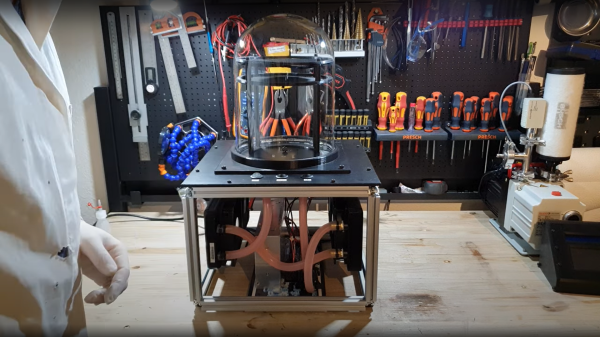 [Advanced Tinkering] over on YouTube has some pretty unique content, on subjects of chemistry and physics that are a little more, interesting let’s say — anyone fancy distilling cesium? The subject of this build is the visualization of ionizing radiation tracks, with one of our old favorite physics demonstrators, the venerable cloud chamber. The build video (embedded below,) shows the basic construction and performance of a Peltier effect cooler setup. The system is used to create a layer of supersaturated (and cold) alcohol vapor in which the radiation source or other experiment can be immersed.

Peltier modules are a great solution for moving heat from one surface to another, but they are not terribly efficient at it, especially if you don’t keep the hot side temperature in check. Effectively they are a short-distance 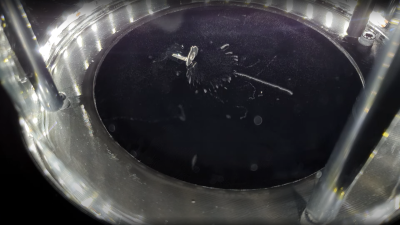 heat pump, so you need to dump the hot-side heat elsewhere. The method [Advanced Tinkering] chose here was to use a pair of off-the-shelf water cooling blocks, mounted into a 3D printed plate. The hot side dumps into a pair of fan-cooled radiators. Four double-layer Peltier modules are wired in parallel to a 60A power supply, which seems like a lot, but Peltier modules are hungry little things. A reasonable amount of power is needed to drive the cooling fans and water pump. The vapor source is a simple pad of liquid alcohol at the top of the stack, just above a metal screen which is held at a high voltage. The vertical electric field allows visualization of the charge of emitted particles, which will curve up or down depending on their polarity.

As can be seen from the second video linked below, some really nice cloud trails are produced, so it looks like they got the setup just right!

Do you need all this complexity to visualize simple radiation paths? No, you don’t, but just temper your expectations. Peltier-based builds are not uncommon, here’s another one, but some builders say they’re not very robust, so this build uses phase-change technology instead for some serious runtimes.