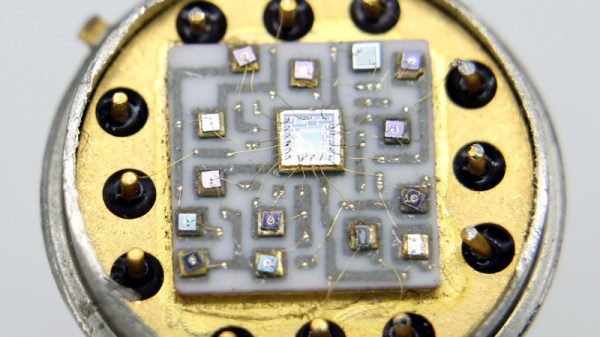 We have covered enough of the work of [Ken Shirriff] on these pages to know that when he publishes something, it will be a fascinating read and work of the highest quality. And so it is with his latest, a very unusual op-amp on which he performs his usual reverse engineering. Not only does it lead us directly to some of the seminal figures in the early years of the semiconductor industry, it turns out to have been a component manufactured to a NASA specification and of which there is an example on the Moon.

The metal can revealed a hybrid circuit when the lid was removed, one in which individual transistors were wired together with a single block containing a group of thin-film resistors. At the start of the 1960s the height of consumer electronics would have been your domestic TV which would have been an all-tube affair, so while it sounds archaic this would truly have been a space-age piece of technology. The designer is revealed as the legendary [Bob Pease], and the transistors take us back to the semiconductor physicist [Jean Hoerni], inventor of the planar transistor and one of the famous eight defectors from Shockley Semiconductor in the 1950s who kick-started the semiconductor boom.

The op-amp itself is a relatively simple design without the compensation capacitor you might expect in a modern device, but what makes it unusual for its time is the use of [Hoerni]’s planar JFETs at its input. [Ken]’s analysis is as usual extremely thorough, and the bit of Silicon Valley history it gives us is the icing on the cake.

If you have a thirst for ancient op-amps, you might like our look at the first commercially available fully-integrated design, the Fairchild μA702.