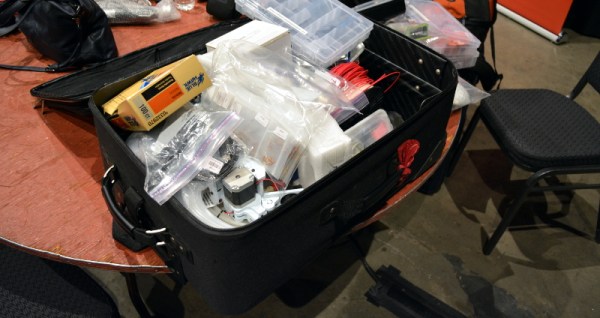 If you roll into a hardware hackathon empty-handed, you’re going to be at a disadvantage compared to those who bring equipment with which they’re already familiar. Pray that you never roll into one where [Kenji Larsen] is your competitor. Luckily, this weekend he came out to mentor for Hackaday’s hardware hacking village at the TechCrunch Disrupt hackathon and not as a competitor. In this video he shows off the huge rollerbag which he calls his “Hack Pack”. I’d say there’s a 50/50 chance his travel setup is better than your home lab.

Where do I begin (seriously, watch the video)? Perhaps best to note is how organized he is. For instance, the large plastic bag containing his battery-operated and plug-in Dremels also has conveniently sized stock like acrylic and metal. There are compartment boxes full of sensors, others contain things like passives, batteries, battery chargers, hundreds of Moteino modules, handfuls of BeagleBones Black, breakout and dev boards of every flavor. He has all the necessary tools like hemostat, x-acto blade, steel ruler, and magnifying glasses. There’s even a 3D printer in the bag — a Printrbot Simple which [Chris Gammell]  err… learned to use as part of his role as a mentor.

We had a ton of hardware along with us, but time and again [Kenji] was there for the save on some of the less-common needs. He’s a expert when it comes to fabrication techniques and it showed. We also give him mad points for staying up overnight for all 20-hours of the build session. Thank you so much [Kenji], I think I speak for every one of the hardware hackers when I say you helped bring the event to the next level of exhilarating and exhausting fun. Please direct your own thanks, stories, and well-wishes, and follows to [Kenji’s] hacker profile.

If you weren’t able to make it to NYC this weekend, you definitely missed out. We’ll be telling the story of that all week. Those on the West Coast will have a chance next weekend at Hackaday Prize Worldwide: LA. The workshop is sold out but socializing on Saturday, and a Sunday free-build are both still available for RSVPs.

Teams hacking on hardware won big this weekend in New York. There were ten teams that answered Hackaday’s call as we hosted the first ever hardware hackathon at the Tech Crunch Disrupt NYC. These teams were thrown into the mix with all of the software hackers TC was hosting and rose to the top. Eight out of our ten teams won!

As we suspected, having something physical to show off is a huge bonus compared to those showing apps and webpages alone. Recipe for awesome: Mix in the huge talent pool brought by the hardware hackers participating, then season with a dash of experience from mentors like [Kenji Larson], [Johngineer], [Bil Herd], [Chris Gammell], and many more.

Out of over 100 teams, first runner-up went to PicoRico, which built a data collection system for the suspension of a mountain bike. The Twillio prize went to Stove Top Sensor for Paranoid, Stubburn Older Parents which adds cellphone and web connectivity to the stove, letting you check if you remembered to turn off the burns. The charismatic duo of fifteen-year-olds [Kristopher] and [Ilan] stole the show with their demonstration of Follow Plants which gives your produce a social media presence which you can then follow.

We recorded video and got the gritty details from everyone building hardware during the 20-hour frenzy. We’ll be sharing those stories throughout the week so make sure to check back!