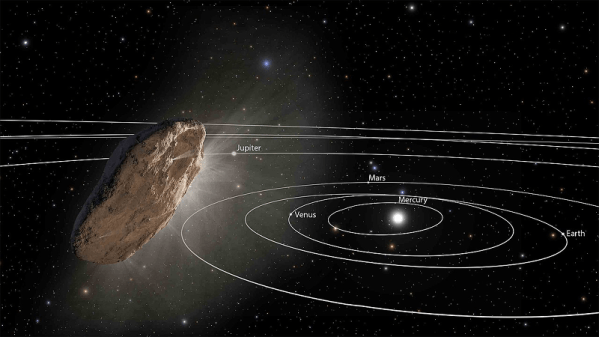 Perhaps you heard about Oumuamua (don’t ask us how to pronounce that). The cigar-shaped object is the first item found by astronomers that is known to have come from outside the solar system and is continuing to pass through, not being captured by the sun’s gravitational field. A recent paper from [Shmuel Bialy] and [Abraham Loeb] from Harvard suggests that the thing could be a discarded light sail from an alien spacecraft.

Of course, it is fun to speculate that anything in space we don’t understand could be alien. However, the paper is doing more than just speculating. The rotation rate of the object suggests it is fairly flat (pancake-like, was the exact phrase used). In addition, it appears to experience “non-gravitational” acceleration — that is, it is accelerating due to some force other than gravity.

Others have suggested that the acceleration is due to material boiling off as the sun warms it. However, there’s no indication of that happening and activity like that ought to also change the spin rate which does not appear to be happening. Solar wind pressure could explain the changes, though. You might think that proves nothing since the solar wind pushes on everything. However, it is just like the wind in the atmosphere — sure it pushes on your car, your house, and a sailboat, but only the sailboat moves appreciably from it.