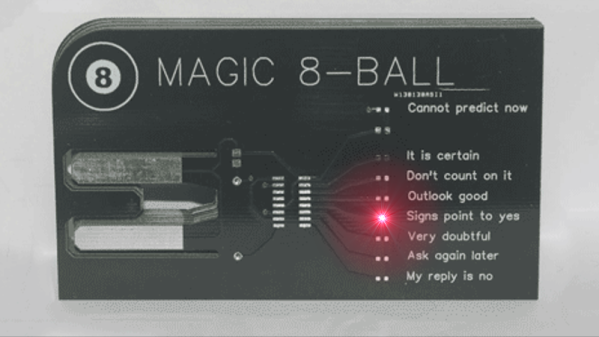 The PCB business card has long been a staple amongst the freelance EE set. It’s a way to show potential clients that you can do the job, as well as leave a great first impression. Some are simple blinkenlights devices, others have contact information on USB storage. We reckon that [Seamus] has really hit it out of the park with this one, though.

That’s right- this business card riffs on the classic Magic 8-ball toy. Ask a question, shake the card, and it’ll light an LED with the corresponding answer to your query. Use it as a desk toy, or break deadlocks in meetings by looking to the card for the correct course of action.

We think it’s a great card, which shows off both fundamental technical skills as well as a certain flair and creativity which can be key to landing exciting projects. It doesn’t hurt that it’s good fun, to boot. For another take on the Magic 8-ball, check out this build that can give you a Yes/No answer on demand.