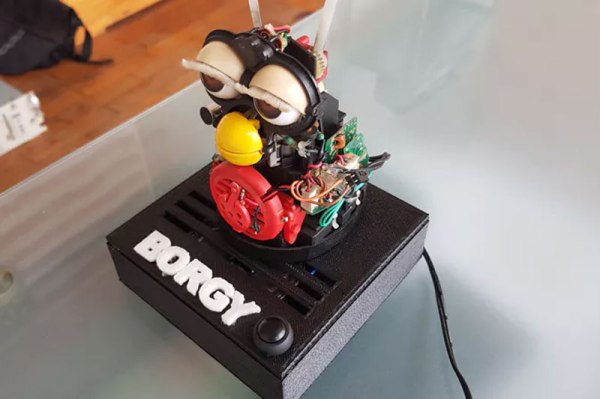 What do you get if you cross a Furby with a master of 20th Century literature? The Borgy. Argentinian hacker [Roni Bandini] found an old Furby and decided to hack it by altering its personality. His inspiration was the Argentinian writer Jorge Louis Borges, one of the pioneers of surrealist writing. The idea is that, at random times during the day, the Borgy will share a bit of wisdom from Borges to inspire and enlighten.

[Roni] hacked the Furby to replace the speaker with a more powerful one, and built a base to hold the larger speaker and a switch which can activate Borgy. He also used an Arduino Nano and a Sparkfun MP3 player shield loaded with the samples of Borges.

When the Furby speaks, it shares some wisdom from Borges. It’s a simple, but a surprisingly effective hack that could be very useful for someone seeking inspiration.  Or, as Borges himself once said: “Don’t talk unless you can improve the silence.”