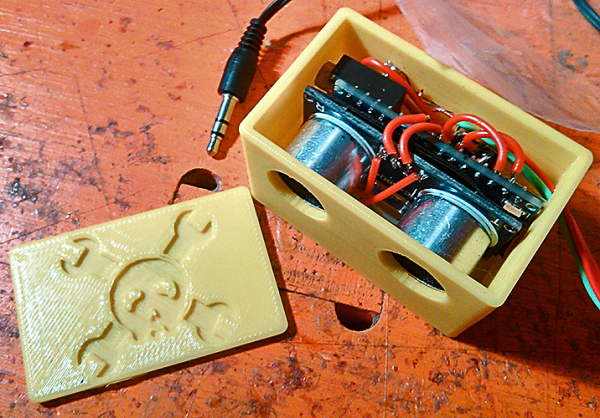 From context clues, we can tell that [TVMiller] has been in and around NYC for some time now. He has observed a crucial weakness in the common metropolitan. Namely, they deafen themselves with earphones, leaving them senseless in a hostile environment.

To fix this problem, he came up with a simple hack, the metrophone. An ultrasonic sensor is hung from a backpack. The user’s noise making device of choice is plugged into one end, and the transducer into the other. When the metropolitan is approached from the rear by a stalking tiger or taxi cab, the metrophone will reduce the volume and allow the user to hear and respond to their impending doom. Augmentation successful.

The device itself consists of an off-the-shelf ultrasonic sensor, an Arduino, and a digital potentiometer. It all fits in a custom 3D printed enclosure and runs of two rechargeable coin cells. A simple bit of code scales the volume to the current distance being measured by the ultrasonic sensor once a threshold has been met.

In the video after the break, you can observe [TVMiller]’s recommended method for tranquilizing and equipping a metropolitan in its natural habitat without disturbing its patterns or stressing it unduly.