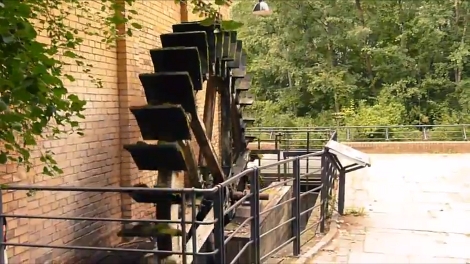 [Niklas Roy] is rolling out some water-powered music for Berlin’s Museum night. It seems that this water-wheel is attached to the side of the Museum. It’s got a stream flowing past it and the wheel is constantly turning. The thing is, that work isn’t being used for anything. Now we’ve already seen [Niklas] making electricity from moving water, but that’s far from what he had in mind this time around. Instead he’s driving a multitude of music boxes with the motion transferred from the water.

He teamed up with another artist named [La belle Imira] to build and connect a series of pulleys to the waterwheel. The video after the break shows the rope system being strung throughout the grounds of the museum. After passing around the output drum of the water wheel, the rope snakes through each pulley. Many of the pulleys have the mechanism from a music box attached to their axles, so whenever the water is flowing, music plays. They don’t all play the same tune, so you get a variety of selections as you walk around. We could swear that one of them is playing ‘My Way’.

END_OF_DOCUMENT_TOKEN_TO_BE_REPLACED