Thanks to 3D printing and cheap hobby servos, building you’re own small walking robot is not particularly difficult, but getting them to walk smoothly can be an entirely different story. Knowing this from experience, [Max.K] tackled the software side first by creating a virtual simulation of his ZeroBug hexapod, before building it.

Learning from his previous experience building a quadruped, ZeroBug started life in Processing as a simple stick figure, which gradually increased in complexity as [Max.K] figured out how to make it walk properly. He first developed the required movement sequence for the tip of each leg, and then added joints and calculated the actuator movements using reverse kinematics. Using the results of the simulations, he designed the mechanics and pulled it back into the simulation for final validation.

Each leg uses three micro servos which are controlled by an STM32F103 on a custom PCB, which handles all the motion calculations. It receives commands over UART from a python script running on a Raspberry Pi Zero. This allows for user control over a web interface using WiFi, or from a gamepad using a Bluetooth connection. [Max.K] also added a pincer to the front to allow it to interact with its environment. Video after the break.

The final product moves a lot smoother than most other servo-driven hexapods we’ve seen, and the entire project is well documented. The electronics and software are available on GitHub and the mechanics on Thingiverse.

END_OF_DOCUMENT_TOKEN_TO_BE_REPLACED 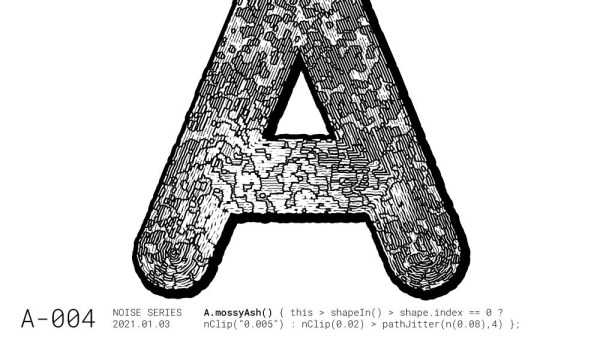 Perlin noise is best explained in visual terms: if a 2D slice of truly random noise looks like even and harsh static, then a random 2D slice of Perlin noise will have a natural-looking blotchy structure, with smooth gradients. [Jacob Stanton] used Perlin noise as the starting point for creating some interesting generative vector art that shows off all kinds of different visuals. [Jacob] found that his results often exhibited a natural quality, with the visuals evoking a sense of things like moss, scales, hills, fur, and “other things too strange to describe.”

The art project [Jacob] created from it all is a series of posters showcasing some of the more striking examples, each of which displays an “A” modified in a different way. A few are shown here, and a collection of other results is also available.

Perlin noise was created by Ken Perlin while working on the original Tron movie in the early 80s, and came from a frustration with the look of computer generated imagery of the time. His work had a tremendous and lasting impact, and was instrumental to artists creating more natural-looking textures. Processing has a Perlin noise function, which was in fact [Jacob]’s starting point for this whole project.

Noise, after all, is a wide and varied term. From making generative art to a cone of silence for smart speakers, it has many practical and artistic applications.

END_OF_DOCUMENT_TOKEN_TO_BE_REPLACED 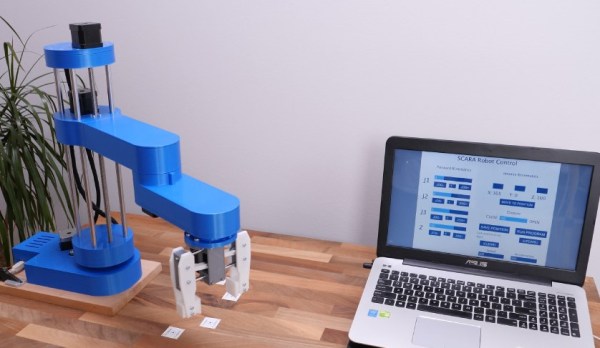 The basic SCARA mechanism is a two-link arm, similar to a human arm. The end of the second joint can move through the XY-plane by rotating at the base and elbow of the mechanism. [How To Mechatronics] added Z-motion by moving the base of the first arm on four vertical linear rods with a lead screw. A combination of thrust bearings and ball bearings allow for smooth rotation of each of the joints, which are belt-driven with NEMA17 stepper motors. Each joint has a microswitch at a certain position in its rotation to give it a home position. The jaws of the gripper slide on two parallel linear rods, and are actuated with a servo. For controlling the motors, an Arduino Uno and CNC stepper shield was used.

The arm is operated from a computer with a GUI written in Processing, which sends instructions to the Arduino over serial. The GUI allows for both direct forward kinematic control of the joints, and inverse kinematic control,  which will automatically move the gripper to a specified coordinate. The GUI can also save positions, and then string them together to do complete tasks autonomously.

The base joint is a bit wobbly due to the weight of the rest of the arm, but this could be fixed by using a frame to support it at the top as well. We really like the fact that commonly available components were used, and the link in the first paragraph has detailed instructions and source files for building your own. If the remaining backlash can be solved, it could be a decent light duty CNC platform, especially with the small footprint and large travel area. END_OF_DOCUMENT_TOKEN_TO_BE_REPLACED

One of the disadvantages of having cheap WiFi-capable boards like those based on the ESP32 is that you have to update them. If you have even a few in every room of your house, it can be a pain to pull them out and connect them to a cable for programming. Over the air programming is a great answer, and [Kevin] shows how you can control the update via a simple GUI. You can see a video demonstration of how it works below.

[Kevin] uses a ready-made OTA library to do the work, but creates a GUI configuration and downloader tool. There is a manual step to force the board into the OTA mode, which might be a mild inconvenience, but it improves security since you need physical access to the device to do an update.

END_OF_DOCUMENT_TOKEN_TO_BE_REPLACED

A lot of consumer gadgets use touch sensors now. It is a cheap and reliable way to replace a variety of knobs and switches on everything from headphones to automobiles. However, creating a custom touch controller for a one-off project can be daunting. A recent ACM paper shows how just about any capacitive sensor can work as a multitouch sensor with nothing more than an Arduino although a PC running processing interprets the data for higher-level functions.

The key is that the Arduino excites the grid using PWM and then examines the signal coming out of the grid. Finger poking changes the response quite a bit and the Arduino can sense it using the analog to digital converters onboard. You can find the actual software kit online. The tutorial document is probably more interesting than the ACM paper if you only want to use the kit.

The optimum drive frequency is 10 MHz. The examples rely on harmonics of a lower frequency PWM signal to get there. The analog conversion, of course, isn’t that fast but since your finger touch rate is relatively slow, they treat the signal as an amplitude-modulated input which is very easy to decode.

The sensors can be conductive ink, thread, or copper strips. There are several example applications, including a 3D printed bunny you can pet, a control panel on a sleeve, and an interactive greeting card.

The sensor forms an image and OpenCV detects the actual touch configuration. It appears you can use the raw data from the Arduino, too, but it might be a little harder.

We imagine aluminum foil would work with this technique. If you get to the point of laying out a PCB, this might come in handy. 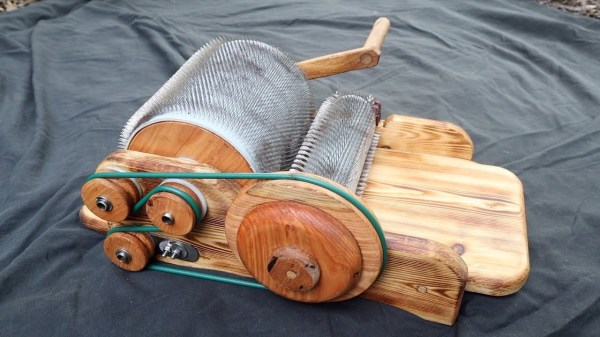