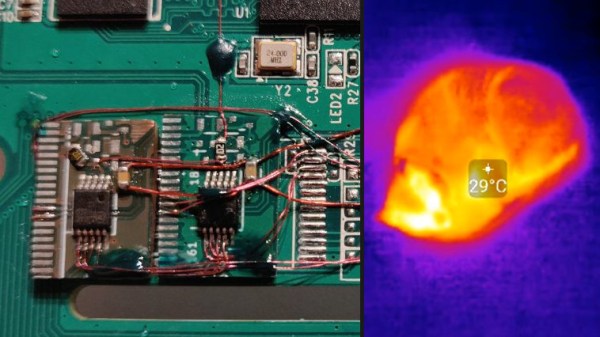 Sometimes a device doesn’t do quite what one needs, and in those cases a bit of tampering might do the trick. That’s what led to being able to record video from a HTI HT-A1 thermal imager despite the device not actually supporting that function, thanks to careful investigation and warranty violation.

We’ve seen a teardown of the HT-A1 in the past, and it turns out that Seek — the manufacturer for the actual thermal sensor inside the device — released an OEM development kit and mobile phone app for their modules. Could this mean that the raw sensor module in the HT-A1 could be accessed via the developer kit app? One hacked together USB cable later showed that the answer is yes! Not only does the app allow viewing thermal imagery, but it makes it possible to do things like record video (a function the HT-A1 itself does not support.)

But even if the HT-A1 doesn’t allow recording, as a handheld thermal sensor with a screen it’s still pretty useful in its own way and it would be shame to gut the unit just for a raw sensor module. The best solution ended up being to put the sensor back into the HT-A1, and install some switching circuitry to disconnect the sensor from the HT-A1’s CPU and divert its data to the USB plug on demand. This means the HT-A1 can be used normally, but by plugging in a custom-made cable while the unit is off, the thermal sensor can be accessed by the mobile phone app instead. Best of both worlds. You can see a brief celebratory thermal cat video embedded below, proving it works.