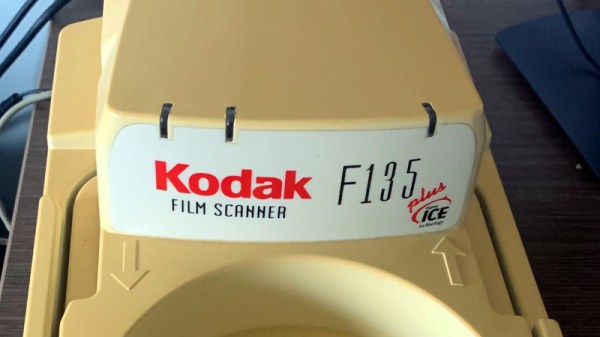 Unless you happen to be a retro enthusiast, it’s fair to say that any photography you do (whether on your phone or a dedicated camera) is going to be digital. The world of photography has all but completely moved away from film, but the transition was not instantaneous. Instead there was a period of about ten years from the mid-90s when film and digital existed side-by-side in some form. A profitable sideline for photography shops was providing scans of film, and there were a series of high-end scanners aimed at that market.

[Kai Kaufman] shares the experience of making one of these work with a modern Windows version, and it’s interesting both because of the scanner itself and the epic tale of software detective work required to bring it up to date. The scanner in question is a Pakon F135, the product of a Kodak acquisition, and an all-in-one device that simply spools in a roll of film and does all the hard work of identifying the frames, cropping the images, and reading any other data from the film.

You may never have seen one of these machines, but if you ever had your photos on a CD as well as printed back in the day you’ve probably had its output. The problem in 2022 is that these machines have drivers which only work with relatively ancient 32-bit Windows versions, so most of the write-up involves some significant detective work into the drivers.

Not every reader will be an expert on Windows driver de-compilation, but perhaps the most interesting pieces of the puzzle come from his detective work in finding the origin of some components. Example code from Microsoft and from a chip design company both make the job much easier, and the final result is a fully functioning 64-bit driver for the device. Not many people will have a Pakon film scanner, but for those who do it seems life may just have become a bit easier.

Thanks [adilosa] for the tip! 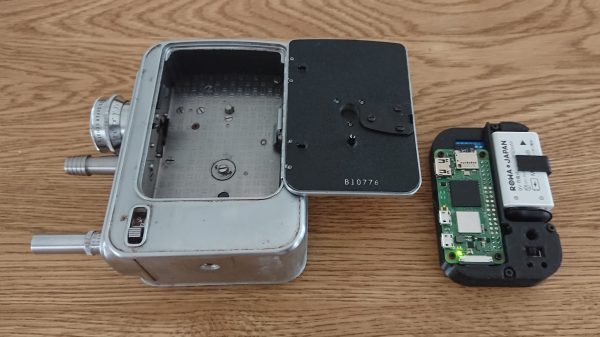 These days, most of us are carrying capable smartphones with high-quality cameras. It makes shooting video so easy as to take all the fun out of it. [AIRPOCKET] decided to bring that back, by converting an old spring-driven 8mm film camera to shoot digital video.

The camera in question is a magazine-fed Bell & Howell Model 172 from the 1950s. In its original spring-driven form, it could shoot for approximately 35 seconds at a (jerky) frame rate 16 fps.

In this build, though, the film is replaced with a digital imaging system designed to fit in the same space as the original magazine. A Raspberry Pi Zero 2 was pressed into service, along with a rechargeable battery and Pi camera module. The camera is timed to synchronise with the shutter mechanism via a photosensor.

Since it uses the original optics and shutter speed, the resulting video is actually very reminiscent of the Super 8 cameras of the past. It’s an impressive way to get a retro film effect straight into a digital output format. The alternative is to just shoot on film and scan it afterwards, of course! Video after the break.

END_OF_DOCUMENT_TOKEN_TO_BE_REPLACED 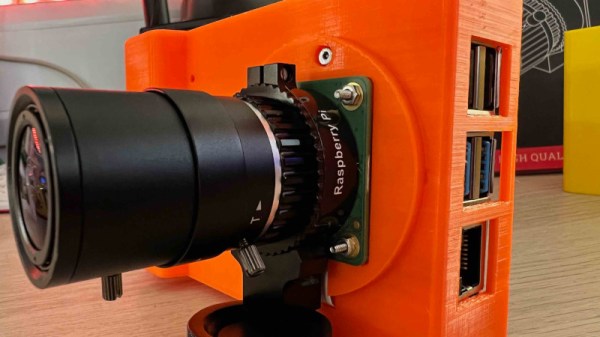 The Raspberry Pi HQ camera has appeared in a variety of builds since its introduction back in 2020, and has brought with it many opportunities for photographic projects to compete with the professionals. The latest we’ve been sent is from [Kevin McAleer], who has taken the camera with a full-size Pi and clothed it in a case very similar to the crop of mirror-less compact cameras.

Inside the box is a Waveshare touchscreen that fits on the GPIO header, and a NanoWave 5000 mAH USB battery pack. The camera module fits on the front of the unit, with the C-mount ready to take a lens. Software is still a work in progress and is promised to be a Python script controlling the various camera programs. There are enough Pi camera projects for software to be a matter of choice and taste.

We like the form factor and we like the use of the very compact NanoWave battery, so we think this is a design with some possibilities. Perhaps a cover over the Pi ports might be of use though for general robustness in the face of everyday photography. The question remains though, whether it can come close to the performance of even a budget mirror-less compact camera, and we’re guessing that will depend as much on the operator skill, lens quality, and software capabilities as it does on the Pi HQ module. We look forward to seeing what comes of this project, but meanwhile you can see a video with all the details below the break.

END_OF_DOCUMENT_TOKEN_TO_BE_REPLACED 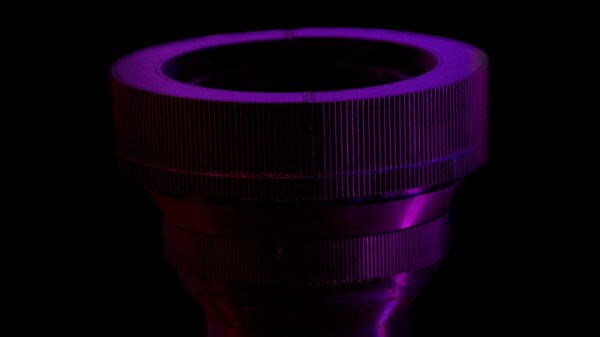 If you’re in the market for a telephoto lens, the available range of optics for your camera is limited only by the size of your bank account. So when [Pixels and Prisms] promises a telephoto for $13 USD it has to be worth a second look, right? Where’s the catch.

The lens has a 3D printed shell containing the optics, with associated focusing and aperture, and has a mount designed for Canon cameras to give a result with 163 mm focal length and f/2.5 . When a Canon lens costs many times more it’s evident that there is some compromise involved, and it comes in the lens system being very simple and comprised of off-the-shelf surplus lenses without the great effort put in by the manufacturer to correct distortion. The result is nonetheless a very creditable lens even if not the first choice for a paparazzo in pursuit of an errant politician.

The real interest for us in this open source project comes in it being something of an experimenter’s test bed for lenses. There’s no need to use the combination shown and the design can be readily adapted for other lenses, so spinning one’s own lens system becomes a real possibility. Plus it’s achieved the all-too-easy task of engaging a Hackaday writer’s time browsing the stock of the Surplus Shed.

We’ve featured a lot of lens projects over the years, but they more often take an existing camera lens as a starting point. 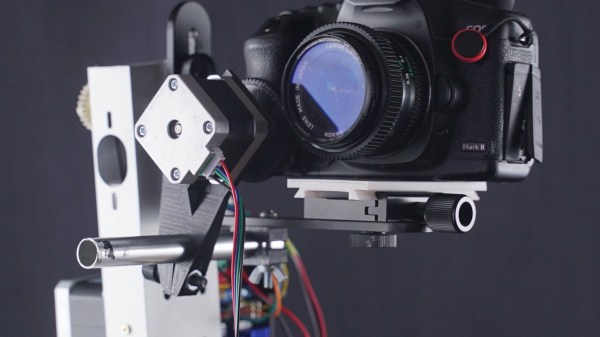 If you plan on building your own motorized camera mount, a 3D printer can definitely be of help. But in this case, [dslrdiy] didn’t use it for printing out parts — finding himself with little use for an old printer built from scrap back in the day, he decided to repurpose it and turn it into a remote controlled DSLR camera mount that’s capable of panning, tilting, and sliding.

The main goal was to not only salvage the stepper motors and controller board, in this case an Arduino Mega 2560 with RAMPS board, but also to keep the original firmware itself in use. For this to work, [dslrdiy] redesigned the mechanical parts that would allow him to perform the different camera movements using regular G-Code instructions operating the X, Y, and Z axes to pan, tilt, and slide respectively.

The G-Code instructions themselves are sent via UART by an accompanying control box housing an ESP32. This allows the camera mount to operated by either via joystick and buttons, or via serial Bluetooth connection, for example from a phone. The ESP32 system also allows to set predefined positions to move to, along with speed and other motor tweaks. You can see it all demonstrated in the video after the break.

While there’s simpler solutions for camera mounts out there, this is certainly an interesting approach. It also shows just how far desktop 3D printers have come if we already find the older generations repurposed like this. For more of [dslrdiy]’s work with 3D printers and cameras, check out his customizable lens caps.

END_OF_DOCUMENT_TOKEN_TO_BE_REPLACED 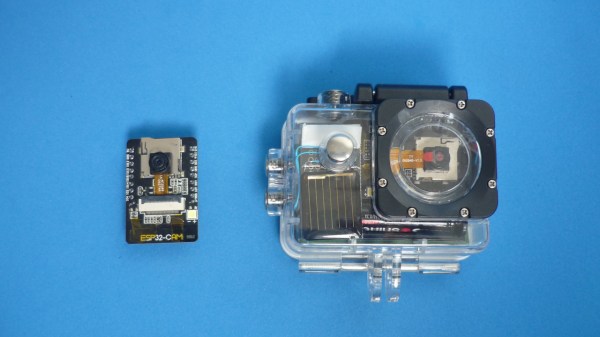 Bokeh is a photography term that’s a bit difficult to define but is basically soft, aesthetically pleasing background blur, often used to make a subject stand out. Also called “background separation” or “subject isolation”, achieving it optically requires a fast lens with an aperture below 2.8 or preferably lower. These lenses can get very expensive, but in the video after the break [Matt] from [DIY Perks] blows all the commercially available options out of the water. Using an old episcope projector, he built a photography rig with background separation equivalent to that of a non-existent 35mm f0.4 lens.

Unlike most conventional projectors used to project a prerecorded image, episcopes were used to project an image of physical objects, like books. To use this lens directly in a camera is impossible, due to the size of the imaging circle projected out the back of the lens. At a diameter of 500mm, there is simply no imaging sensor available to capture it. Instead, [Matt] built a projection screen for the image and photographed it from the opposite side with a normal camera.

The projection screen was made by sandwiching a sheet of diffuser film between two sheets of clear acrylic held in a frame of aluminum extrusions. To block out all other light, [Matt] added aluminum shrouds on either side of the screen, which also serves to mount the lens and a camera. The shroud on the lens’ side is mounted on a separate aluminum frame, enabling the image to be focused by adjusting the distance between the screen and lens. Linear rods and bearings on 3D printed mounts allow smooth motion, while a motor-driven lead screw connected to a wired remote does the actual adjustment. The gap between the two halves was covered with bellows made from black paper. END_OF_DOCUMENT_TOKEN_TO_BE_REPLACED