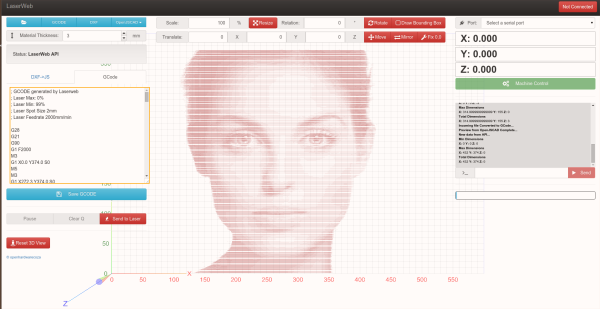 Laser cutters are fantastic pieces of equipment, and thanks to open-source improvements in recent years, are getting even cheaper to make. It can be as simple as throwing a high-powered laser diode onto the head of your 3D printer! With so many home-brew designs out there, wouldn’t it be nice if there was some all-encompassing open-source, laser-cutter controller software? Well, as it turns out — there is, and it’s called LaserWeb.

What started as a simple personal project by [Peter van der Walt] has recently grown into a very formidable piece of software with over 10 contributors in just three months. It even supports four different firmwares, from grbl, to smoothieware, marlin and even lasaurgrbl!

It’s designed to support home-made laser cutters, diode based laser engravers, and even converted Chinese laser cutters. With built-in CAM for PolyLine DXF, and SVG, it can even create rasters from images. Stick around after the break to see a quick video demo — we’re going to have to try this out!