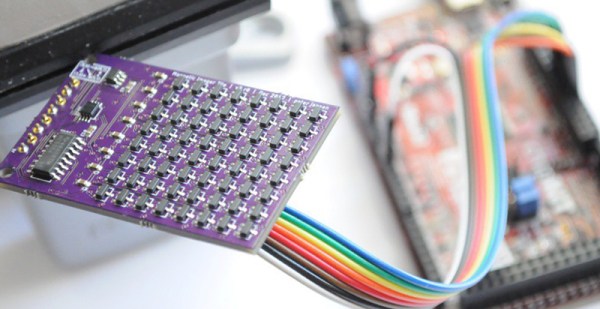 Some time before experimenting with MRI machines and building his own CT scanner, [Peter Jansen] wanted to visualize magnetic fields. One of his small side projects is building tricoders — pocket sensor suites that image everything — and after playing around with the magnetometer function on his Roddenberry-endorsed tool, he decided he had to have a way to visualize magnetic fields. After some work, he has the tools to do it at thousands of frames per second. It’s a video camera for magnetic fields, pushing the boundaries of both magnetic imaging technology and the definition of the word ‘camera’.

When we last looked at [Peter]’s Hall effect camera, the device worked, but it wasn’t necessarily complete. The original design used I2C I/O multiplexers for addressing each individual ‘pixel’ of the Hall effect array, limiting the ‘framerate’ of the ‘camera’ to somewhere around 30 Hz. While this would work for visualizing static magnetic fields, the more interesting magnetic fields around us are oscillating — think motors and transformers and such. A much faster magnetic camera was needed, and that’s what [Peter] set out to build.

Instead of an I/O expander, [Peter] re-engineered his design to use analog multiplexers and a binary counter to cycle through each pixel, one at a time. Basically, the new circuit uses two analog muxes for the columns and rows of the Hall effect array, a binary counter to cycle through each pixel at Megahertz speed, and a fast ADC to read each value. It is, bizarrely, the 1970s way of doing things; these are simple chips, and the controller (a Chipkit Max32) only needs to read a single analog value and clock the binary counter really fast.

With the new design, [Peter] is able to get extremely fast frame rates of about 2,000 Hz. That’s fast enough for some beautiful visualizations of spinning motors and transformers, seen in the video below. Further improvements may include three-axis magnetometers, which should allow for some spectacular visualizations similar to [Ted Yapo]’s 3D magnetic field scanner.

END_OF_DOCUMENT_TOKEN_TO_BE_REPLACED

[Peter Jansen] is the creator of the Open Source Tricorder. He built a very small device meant to measure everything, much like the palm-sized science gadget in Star Trek. [Peter] has built an MRI machine that fits on a desktop, and a CT scanner made out of laser-cut plywood. Needless to say, [Peter] is all about sensing and imaging.

[Peter] is currently working on a new version of his pocket-sized science tricorder, and he figured visualizing magnetic fields would be cool. This led to what can only be described as a camera for magnetism instead of light. It’s a device that senses magnetic fields in two directions to produce an image. It’s cool, and oddly, electronically simple at the same time.

Visualizing magnetic fields sounds weird, but it’s actually something we’ve seen before. Last year, [Ted Yapo] built a magnetic imager from a single magnetometer placed on the head of a 3D printer. The idea of this device was to map magnetic field strength and direction by scanning over the build platform of the printer in three dimensions. Yes, it will create an image of field lines coming out of a magnet, but it’s a very slow process.

Instead of using just one magnetic sensor, [Peter] is building a two-dimensional array of magnetic sensors. Basically, it’s just a 12×12 grid of Hall effect sensors wired up to a bunch of analog multiplexers. It’s a complicated bit of routing, but building the device really isn’t hard; all the parts are easily hand-solderable.

While this isn’t technically a camera as [Peter] would need box or lens for that, it is a fantastic way to visualize magnetic fields. [Peter] can visualize magnets on his laptop screen, with red representing a North pole and green representing the South pole. Apparently, transformers and motors look really, really cool, and this is a perfect proof of concept for the next revision of [Peter]’s tricorder. You can check out a video of this ‘camera’ in action below.

END_OF_DOCUMENT_TOKEN_TO_BE_REPLACED

In 1820, Hans Christian Oersted discovered the needle of a compass would deflect when placed next to a wire carrying an electric current. It took 15 years for the first electric motor to be invented following this observation. Humans are dumb, but perhaps they wouldn’t be so oblivious to the basic facts of our reality if they could see magnetic fields. Or if they just had a 3D printer. For his Hackaday Prize entry, [Ted Yapo] is doing just this: adding a magnetic field scanner to a 3D printer, allowing for the visualization of magnetic fields in three dimensions.

The device [Ted] is working on is actually extremely simple, and is mostly implemented in software. The hardware is just a 3D printer with a toolhead consisting of a HMC5883L magnetometer breakout board. This is the simplest and easiest way to find the direction and intensity of a magnetic field, the rest of the work is done in software.

Right now, [Ted] has a setup that will scan a 3D volume with a printer. By placing a magnet in the middle of the print bed, he can visualize the magnetic field inside the volume of his 3D printer. It’s a visualization that is vastly superior to a compass, ferrofluid, or even a mess of iron filings, and is surely a much better pedagogical apparatus for classrooms and science museums alike.