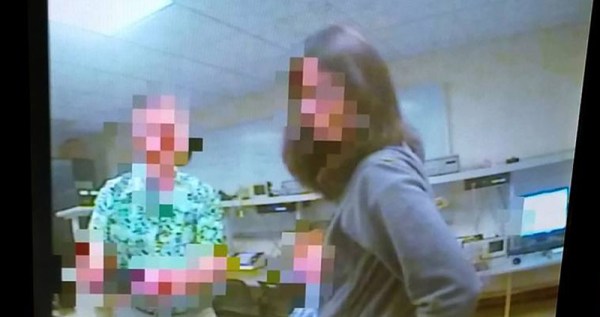 If you’re wondering, Cornell is just like every other university in one respect: the grad students are starving, and wherever there is free food, students circle like vultures. The engineering and CS departments have a mailing list alerting people to free food, but a more automated solution was desired. The first web cam ever was used to notify grad students if a coffee pot was full, but Cornell shot down this idea on the basis of privacy concerns.

It’s final project time for [Bruce Land]’s courses, and a project by [Ferian Chen] and [Sean Ogden] solved the privacy concerns of a webcam in a kitchen. It’s a real-time video anonymizer, that can also be used to livestream ransom demands if you’re so inclined.

There are actually two parts to this project. The first part pixellates faces and any other skin tone, just like you’d see on a true crime TV show. This part of the project was based on an FPGA-based face detection project. ‘Skin’ pixels are defined as having a difference between the red and green channels within a certain range. With the right lighting, it works very well.

You can identify someone with their voice, too, so [Ferian] and [Sean] also made efforts to disguise hungry student’s voices as well. This was done with a phase vocoder that changes the pitch of someone’s voice, but not the spectral characteristics. The result should have been an audio channel that can’t be pinned down to one person, but is still recognizable as speech. The audio processing didn’t work as intended, with noticeable artifacts in the output. There’s still some work to be done, and now that [Ferian] and [Sean] aren’t checking the kitchen every ten minutes, the might have the time to do it.