If you have a BeagleBone, you already have a lot of tools. We’ve seen them used in driving hundreds of LEDs at a very high frame rate, used as a video card for ancient computers, and as a software defined radio. For his entry to The Hackaday Prize, [Kumar] turned his BeagleBone into a 14-channel, 100Msps logic analyzer that’s good enough to debug just about all those hobby electronics projects you’re working on.

The BeagleBone is only able to have this sort of performance as a logic analyzer because of its PRUs, those fancy peripherals that make the Beagle great at blinking pins really, really fast. [Kumar] is using both PRUs in the BeagleBone for this project. PRU1 reads from the input probes, and PRU0 writes all the samples into DDR memory directly. From there, the samples are off to kernel modules and apps, either sigrok, dd, or something you coded up in Python.

Compared to the cheap logic analyzers we have today like the Salae Logic and the DSLogic, [Kumar]’s project is just as good as any commercial offering (provided you can live with 14 channels instead of 16), and because it’s based on a BeagleBone, the software is infinitely expandable.

UPDATE: After this post was written but before it was published, [Kumar] finished up a blog post on how he’s building a logic analyzer with the BeagleBone’s PRUs. It’s a true tutorial, with enough code demos to allow anyone to build their own 8-bit analyzer on a BeagleBone, and there are more updates coming.

Back when he was about seven years old, [Ytai] learned to program on an Atari 800XL. Now he has a seven-year-old of his own and wants to spark his interest in programming, so he created these programmable LEGO bricks with tiny embedded microcontrollers. This is probably one of the few times that “bricking” a microcontroller is a good thing! 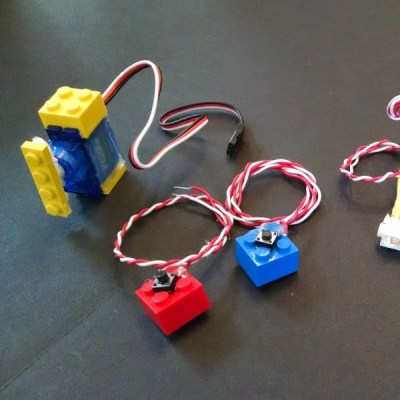 The core of the project is the Espruino Pico microcontroller which has the interesting feature of running a Java stack in a very tiny package. The Blocky IDE is very simple as well, and doesn’t bog users down in syntax (which can be discouraging to new programmers, especially when they’re not even a decade old). The bricks that [Ytai] made include a servo motor with bricks on the body and the arm, some LEDs integrated into Technic bricks, and a few pushbutton bricks.

We always like seeing projects that are geared at getting kids interested in creating, programming, and hacking, and this certainly does that! [Ytai] has plans for a few more LEGO-based projects to help keep his kid interested in programming as well, and we look forward to seeing those! If you’re looking for other ways to spark the curiosity of the youths, be sure to check out the Microbot, or if you know some teens that need some direction, perhaps these battlebots are more your style.

Whew, your Wednesday night entertainment is all sorted out. Mark it in your calendar, [Sophi Kravitz] will be appearing on Adafruit’s Ask an Engineer at 8pm EDT (UTC -4).

Of course she’ll be talking about The Hackaday Prize with all of the incredible entries so far and the amazing opportunities waiting for you as THP continues through the summer. But [Sophi’s] life experience runs far-and-deep and so will the conversation. She is an Electronics Engineer, an Artist, and a huge part of the Hackaday crew. This year she landed a grant to bring one of her projects to life for Burning Man (and to document the process which we’re really excited about). She’s brewing up a new project involving Quadcopters and the technology [Alan Yates] has been working on for Valve. And [Sophi] frequently works on projects like Breathe that delight us with her creativity.

But hey, we better leave some of it for the show. The live link is above, here’s the Adafruit page as well.

END_OF_DOCUMENT_TOKEN_TO_BE_REPLACED

A filmmaker friend of [Thomas] mentioned that she would like to display a triptych at the 2015 Venice Art Walk. This is no ordinary triptych with a frame for three pictures – this is a video triptych, with three displays each showing a different video, and everything running in sync. Sounds like a cool engineering challenge, huh?

The electronics used in the build were three Raspberry Pi 2s and a trio of HDMI displays. Power is provided by a 12V, 10A switching supply with 5V stepdown converters for the Pis. The chassis is a bunch of aluminum bars and U channel encased in an extremely well made arts and crafts style frame. So far, nothing out of the ordinary.

Putting three monitors and three Pis in a frame isn’t the hard part of this build; getting three different displays all showing different videos is. For this, [Thomas] networked the Pis through an Ethernet hub, got the videos to play independently on a RAM disk with omxplayer. One of the Raspberry Pis serves as the master, commanding the slaves to start, stop, and rewind the video on cue. According to [Thomas], it’s a somewhat hacky solution with a bunch of sleep statements at the beginning of the script to allow the boot processes to finish. It’s a beautiful build, though, and if you ever need to command multiple monitors to display the same thing, this is how you do it.

Single-board computing is hot on the DIY scene right now and riding that knife edge is C.H.I.P., a project currently in crowd-funding which prices the base unit at just $9. I was happy to run into the crew from Next/Thing Company who developed C.H.I.P. They were happy because, well, the project’s reception has been like a supernova. Right now they’re at about $1.5M of their original $50k goal. We spoke about running Linux on the board, what connectors and pinout headers are available, as well as the various peripheral hardware they have ready for the board.

END_OF_DOCUMENT_TOKEN_TO_BE_REPLACED

[Justin]’s friend [Steve] injured his spine a while ago, and after asking what would make [Steve]’s life simpler, the answer was easy. [Steve] missed reading books. Sure, e-readers exist, but you still need to turn the page. Now [Steve] can do that with his voice thanks to some microcontrollers, Bluetooth modules, and a voice recognition module.

A voice-activated page turner wasn’t the first attempt at giving [Steve] the ability to turn a page on a Kindle. The first prototype was a big blue button that sent a keyboard code for ‘right arrow’ over Bluetooth, turning a book one page at a time. This worked well until multiple pages turned, and with no back button it was a major nuisance.

After playing with the voice recognition in an Amazon Echo, [Steve] and [Justin] wondered if the same voice recognition technology could be applied to page turns on a Kindle. With a voice recognition Arduino shield from SparkFun it was easy to detect a ‘page down’ command. A Bluetooth module sends HID commands to a Kindle, allowing [Steve] to read a book with only his voice.

[Justin] put all the design files for this build up on Github.