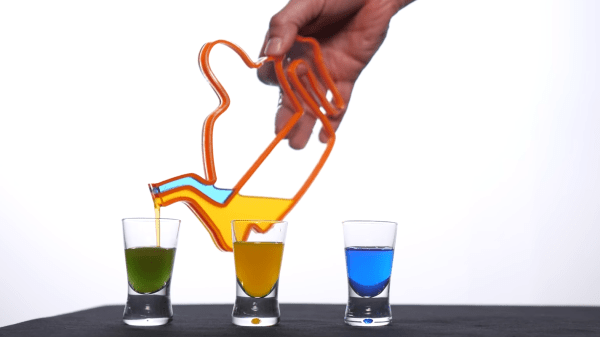 Many films use a similar trope when it comes to poisoning. The aspiring murderer ingests a drink poured from the same vessel as that given to their intended victim to indicate the liquid is safe to imbibe. The Assassin’s Teapot is a way one could achieve such a ruse, allowing two different liquids to be poured from what is seemingly a regular teapot, as shown by [Steve Mould]. (Video after the break.)

The trick is simple. Two separate cavities exist within the teapot, exiting via their own paths in the same spout. Each cavity also has an air hole in the top. If the hole for a given cavity is blocked by the pourer’s thumb, the liquid will not flow.

Each cavity can be filled with its own liquid. For example, one can be filled with tea, the other with poisoned tea. The murderer blocks the hole for the poison cavity when pouring their own beverage, delivering tea to their own glass. Then, when pouring for the enemy, the hole for the tea cavity is blocked, and poison is allowed to flow into the glass of one’s target.

It also shows a minor flaw in the design, which should be accounted for –  if the spout isn’t designed carefully, sometimes flow from one cavity can dribble into the other. Between this and the chance of getting confused about which hole to cover to pour the poison, it would pay to keep some antidote on hand. Or, alternatively, just pour your guests tea instead – they’ll appreciate it!

We’ve seen [Steve] explore similarly interesting liquid vessels before too, such as this simple breakdown of the workings of the Gluggle Jug.