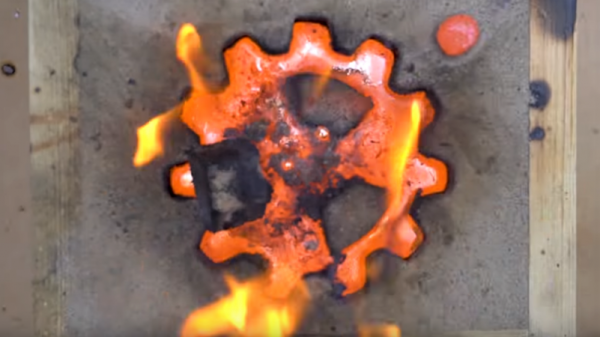 There’s trouble in the Kingdom of Random – the smithies of the realm are having trouble sand-casting copper. And while [King Grant] might not be directly asking for help, we think the Hackaday community might have plenty to say about his efforts.

We’ve all seen plenty of sand casting efforts before, including attempts to make otherwise unobtainable engine parts. And “lost foam” casting, where a model of the part is constructed of polystyrene foam that flashes off when the molten metal is poured, is a relatively new twist on the technique that’s been used to good effect on a recent Gingery lathe build. But most backyard foundries work in aluminum, which is apparently much easier to work with than the copper that [Grant Thompson] is working with. Ironically, his first pour worked the best — not perfect, but at least the islands defining the spokes of his decorative piece didn’t break off and float away as they did in every pour shown in the video below. That leads us to think that the greensand is too dry by the second video. Or perhaps the density of copper just makes it more likely for the sand to float. Maybe a cope and drag mold is in order to keep the islands in place and direct the flow of the copper better.

We know there’s a lot of expertise out there, so sound off in the comments about what you think is going on with these pours.