Here’s a rose-colored look into the steelworks at Workington, Cumbria in northern England. At the time of filming in 1974, this plant had been manufacturing steel nonstop for 102 years using the Bessemer process. [Sir Henry Bessemer]’s method for turning pig iron into steel was a great boon to industry because it made production faster and more cost-effective. 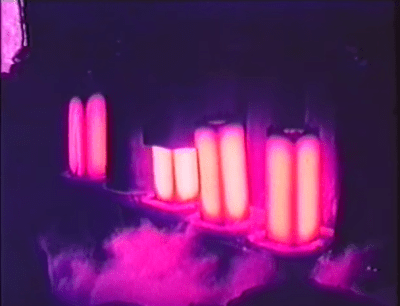 More importantly, [Bessemer]’s process resulted in steel that was ten times stronger than that made with the crucible-steel method. Basically, oxygen is blown through molten iron to burn out the impurities. The silicon and manganese burn first, adding more heat on top of what the oxygen brings. As the temperature rises to 1600°C, the converter gently rocks back and forth. From its mouth come showers of sparks and a flame that burns with an “eye-searing intensity”. Once the blow stage is complete, the steel is poured into ingot molds. The average ingot weighs four tons, although the largest mold holds six tons. The ingots are kept warm until they are made into rail.

The foreman explains that Workington Works would soon be switching over to a more modern process. As it was, Workington ran a pair of Bessemer converters on a 40-minute schedule, ensuring constant steel production from ore to rail. Between 1872 and 1974, these converters created an estimated 25 million metric tons of steel.