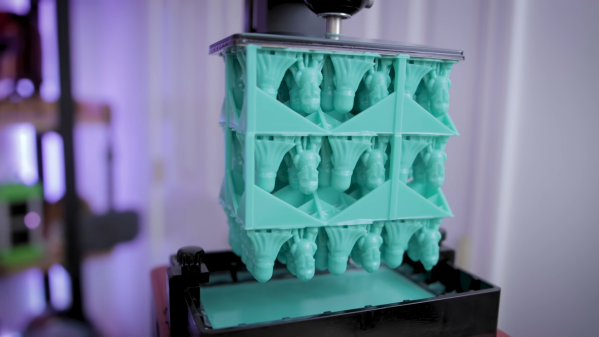 3D printers are typically the tool you use when you want a one-off quick prototype. However, more and more, they’re being used to produce things in quantity. [Uncle Jessy] decided to try out the resin stacking technique in order to quickly produce many figurines on his resin printer. However, not everything went exactly to plan.

The technique is simple. The idea is to produce many copies of an object in a single continuous print on a resin 3D printer. To achieve this, the object is cloned many times, and scaffolding is created to allow the stacking of multiple objects on top of each other. This must be done carefully to avoid ruining the geometry of the object, and similarly to support material, uses more resin in the process.

[Uncle Jessy] experimented several times, but ran into multiple issues with the process when trying to print out some small Magneto figurines. An initial experiment using a raft failed when the print fell off the build plate. With the raft removed, the second print failed as the scaffolding didn’t print quite right. Further tweaks and beefing up the scaffold improved things, and [Jessy] managed to print 93 figurines in a single operation.

It’s a useful technique if you want to print a ton of models on a resin printer in as short a time as possible. However, expect to spend plenty of resin as you refine the technique. You’ll also need a big wash tank to clean the prints during post-processing. Video after the break.