As if the war in Ukraine weren’t bad enough right here on Earth, it threatens knock-on effects that could be felt as far away as Mars. One victim of the deteriorating relationships between nations is the next phase of the ExoMars project, a joint ESA-Roscosmos mission that includes the Rosalind Franklin rover. The long-delayed mission was most recently set for launch in October 2022, but the ESA says that hitting the narrow launch window is now “very unlikely.” That’s a shame, since the orbital dynamics of Earth and Mars will mean that it’ll be 2024 before another Hohmann Transfer window opens. There are also going to be repercussions throughout the launch industry due to Russia pulling the Soyuz launch team out of the ESA’s spaceport in Guiana. And things have to be mighty tense aboard the ISS right about now, since the station requires periodic orbital boosting with Russian Progress rockets.

END_OF_DOCUMENT_TOKEN_TO_BE_REPLACED 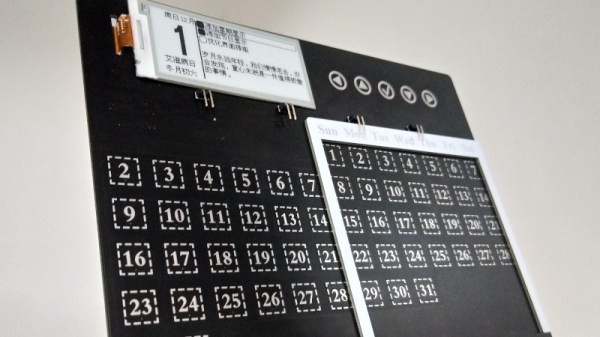 With the office computer revolution now many decades old, many of the items that once stood on a typical desk are now part of history. The typewriter, the Rolodex, and the desk calendar have all been subsumed by computers and mobile phones. This electronic desk calendar is perhaps an exception, created as a promotional device for the RT-Thread IoT OS. It features an interesting take on a perpetual calendar, with an array of days spanned by a sliding frame such that any month’s days of the week can be depicted. The days are touch buttons, and can be used to bring up the information on an e-ink display.

Behind it all is a WinnerMicro W600 WiFi-enabled system-on-chip, that runs the aforementioned RT-Thread IoT OS. This OS is a bit of a mystery, according to its Wikipedia page it’s an open-source project from China with ten years of development behind it, but this appears to be the first time we’ve seen it here at Hackaday. Anyone using it?

We like this project though, for its perpetual calendar, and for its re-imagining of a bygone desk accoutrement with an e-ink display to conserve battery. It’s not the first e-ink calendar we’ve seen, this previous one used a Raspberry Pi.